I was going to Europe to meet my husband's USN ship. He was a pilot and flew S2Fs (antisubmarine planes) off of an aircraft carrier (photo of the plane)

which was supposed to have the following itinerary

Between 3rd and 5th of September - arrive home in Norfolk.

I was to meet him in Valencia, Toulon and Naples. I was leaving my two children (age 3 and age 9 months) home with my mother.

The first part of the trip I do not have my photos nor do I have at least one letter I wrote so this is a short summary. Starting July 14th, I drove from Norfolk to Baltimore with the children, got on a train to Philadelphia, took a taxi to the German Society headquarters, boarded a bus which took us to New York to the plane, flew to Cologne, had breakfast in front of the Cathedral and then had a tour of Cologne which included the Rathaus. Inside was a glass window by Professor Meistermann "The Life of the Town" which was a kind of timeline of history. (The girl in the photo was the daughter of someone on the tour) We also saw the foundations of the Roman Pratorium which was underneath it.

After that I went to the train station and had lunch (some kind of sausage) and took the train down the Rhine to Frankfort where I was to meet my cousin. But we didn't manage to recognize each other, partly because I was described to her as wearing this light blue suit (this photo taken in 1965 but I look pretty much as I did in 1964 - just my children are a year older.) 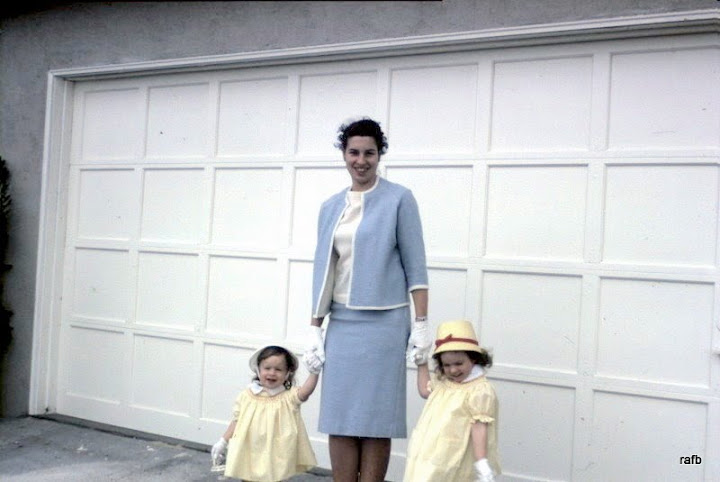 and really I was wearing a navy dress. My sister said that my cousin (whom I hadn't seen in over 10 years) was dark, thin and short, and the soldier at the station said she was dirty blonde and my height [5'7"].

Anyway, I got on the train to Paris - had a couchette for overnight. I got on about a half hour before the train was to board.

This part I did not write to my mom. The train was a French train with a French porter. The porter came to my compartment and tried some conversation in broken English with a heavy French accent.

He asked me a question and I thought the question was "Do you want allez?" I knew enough French to know that "allez" in French was "To go", and that question made no sense whatsoever to me. So I was confused, plus hot, tired and a bit jet lagged too I guess.

It did not dawn on me until about three times through him asking me this question, that he was speaking all English, and that he was asking me if I wanted "a lay". I didn't of course and I didn't know how to answer him that wouldn't offend him or get me into more trouble, so I kept on acting like I didn't understand him. Eventually he left in disgust.

In the morning (July 16th) I was in Paris. I went to Notre Dame (climbed the tower), Arc de Triomph and went up the elevator to the top, and then went to the Eiffel Tower and went up as far as the second stage 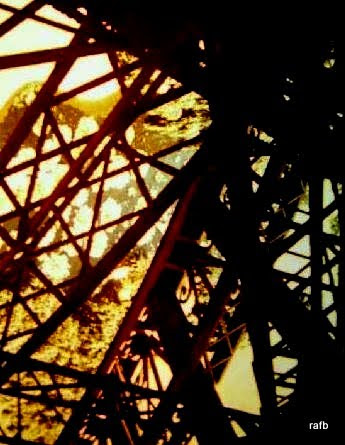 before I had to come down and to to the RR station to get the overnight train to Madrid.

This is the point at which I have more photos. After we switched trains at the border (the Spanish trains had a different gauge track), we saw the Atlantic from the train and also communities of tenting vacationers. 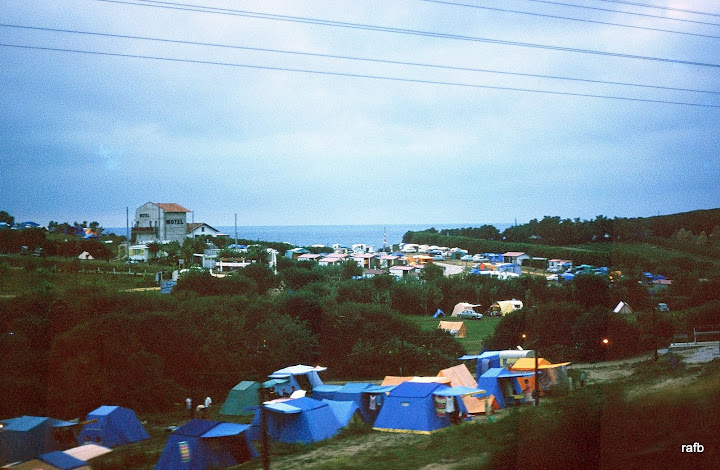 Except for the electric lines which tend to get in the way of pictures from the train, it is very primitive country. All the towns are brightly lighted at night though. 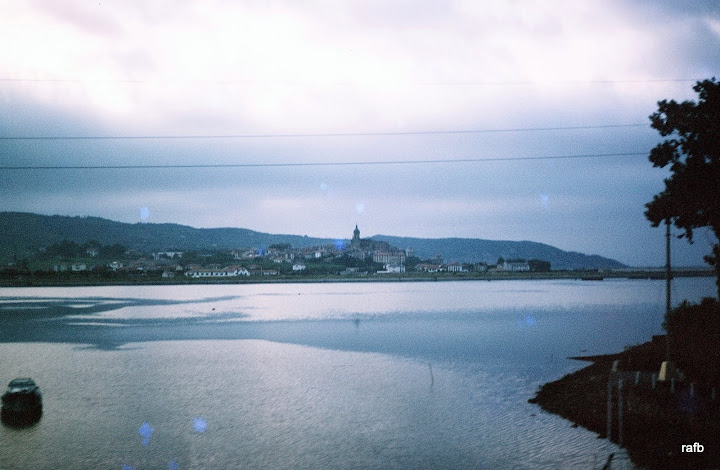 Town across the inlet from the train 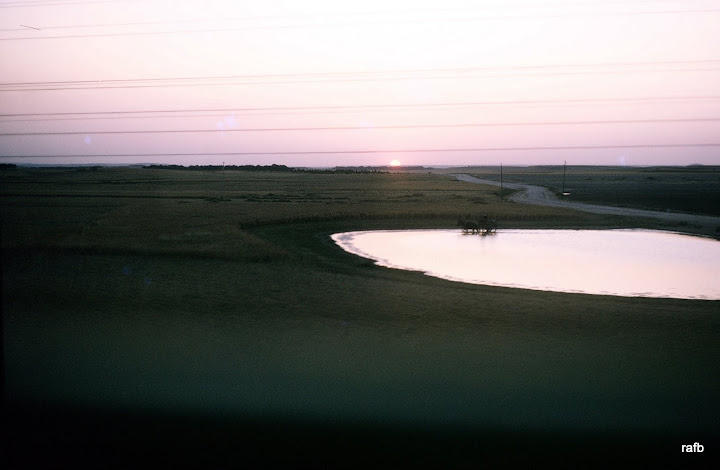 Pond and mules (?) at sunset from the train 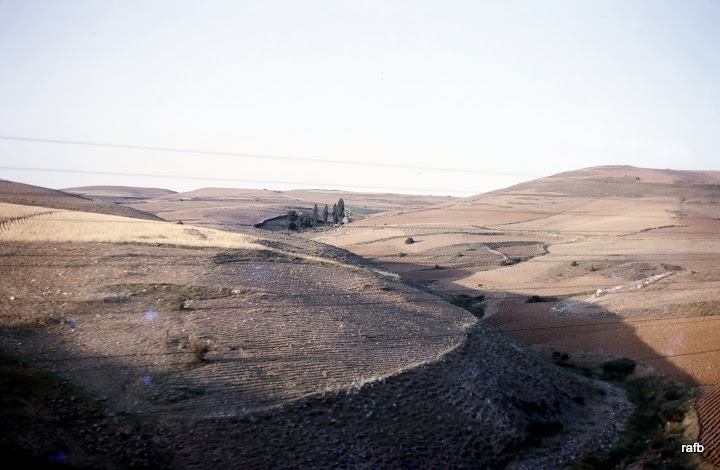 Stony ground the next day - from a letter to my mother

The sun was coming up, and I inspected myself in the mirror of the WC. I looked like a coal miner. The Spanish use the old fashioned pufferbelly engine.

It is freezing cold. (Well I don't know if it really is.) I have on my raincoat and sweater and all the windows had to be closed because I started to sneeze anyway. Two men were very courtly (in Spanish) about it.

We see shephards and irrigated fields and many electric power lines and castles and horse and donkey drawn carts. It is fairly flat, but rocky and mountains in the distance.

We are now climbing again. This is supposed to be an express, but the Lone Ranger and Silver could catch it easily. 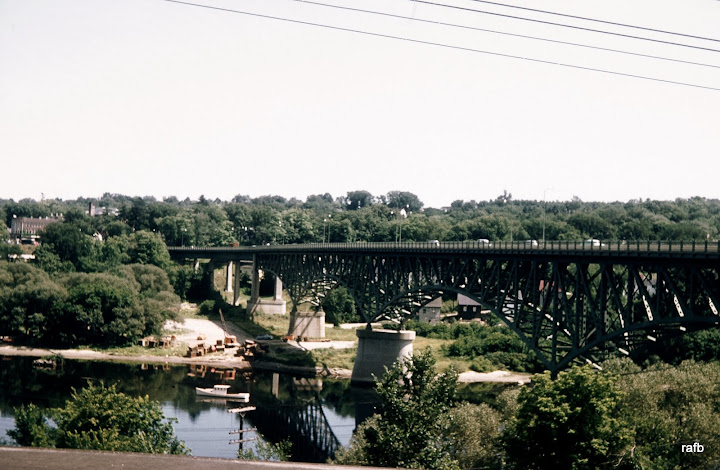 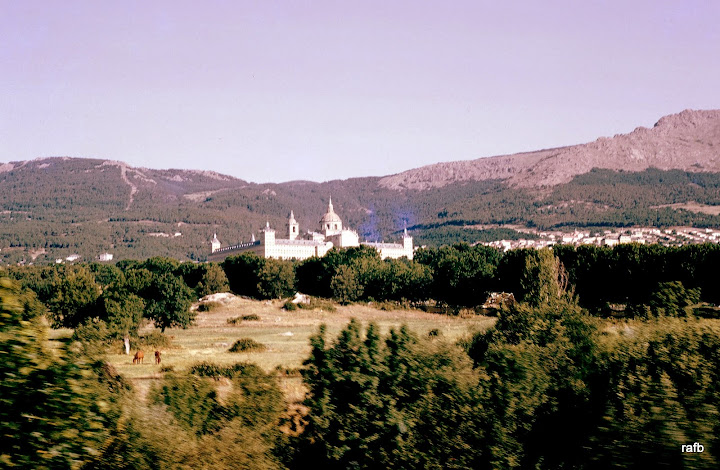 I saw the Valley of the Fallen (below) and El Escorial (above) from the train. A nice Spanish man was kind enough to alert me each time. 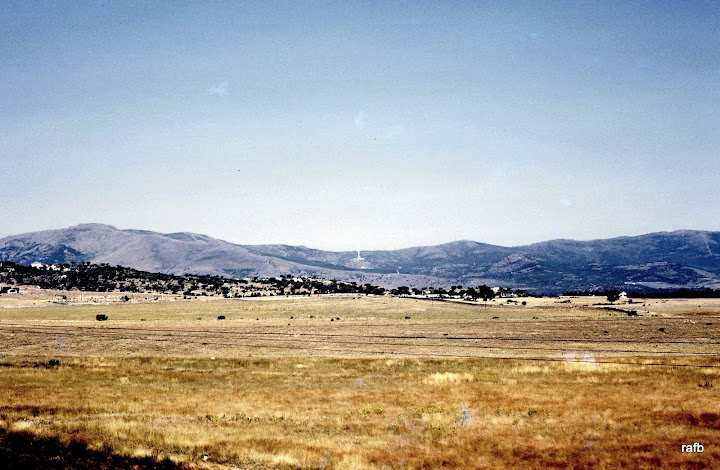 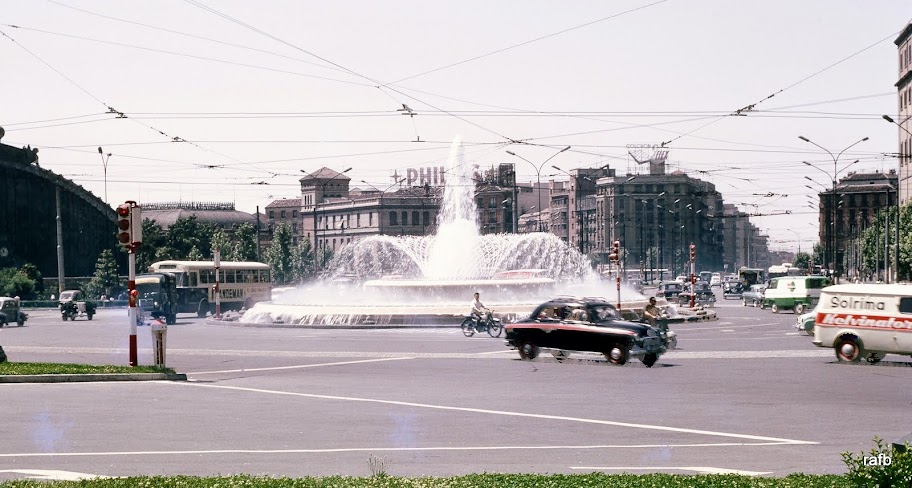