Parliament Hill and the Ottawa River I was in Ottawa two years ago on vacation. This time, I was here to attend the National Memorial Service on Remembrance Day (Veteran's Day in the U.S.). It's something I've always wanted to do. This year I finally got off my duff and actually did it.

The service was to start at 11am at the National War Memorial. I got there an hour early to stake out a good spot, but the crowd was already six deep. I thought I had picked a good spot. It turned out to be probably the worst possible spot to stand. After more people showed up I couldn't see the war memorial where the ceremony was happening. I was also standing right next to the Jumbotron, so I couldn't see that either. I did have a great view of the roof-top snipers, though. I'm sure they had a good view of me as well. Of course, the loudest cheers were for the veterans. 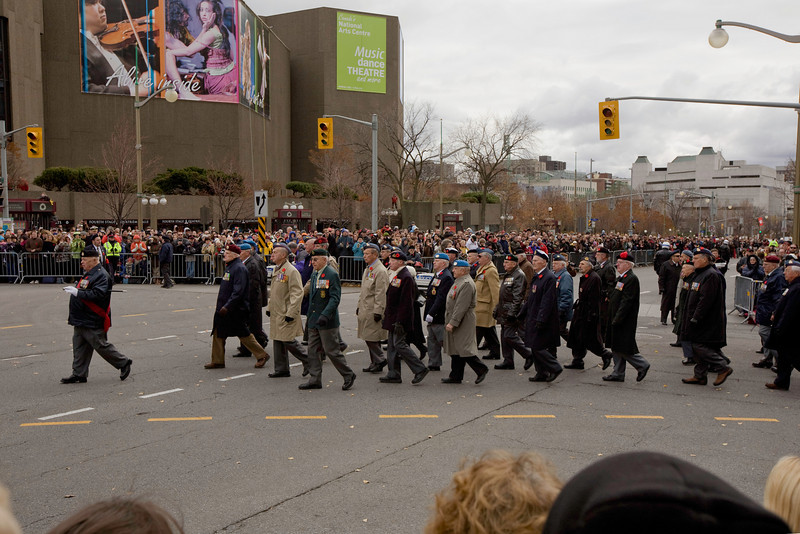 Since I didn't have a good view of the war memorial, I didn't get any photos of the actual service. It was attended by the Governor General of Canada, the Prime Minister, the Chief of the Defense Staff, Veteran's Affairs minister, other dignitaries and the Ottawa diplomatic corps. The service was as follows:

During the Act of Remembrance, the presiding chaplain recites the following words:
They shall grow not old as we are left grow old;
Age shall not weary them nor the years condemn;
At the going down of the sun and in the morning
We will remember them.
Then the crowd replies in unison
We will remember them.
After the service everyone converges on the War Memorial. It was a good crowd, with plenty of young people. Tourist poses with a Mountie. Wreaths laid by the diplomatic corps. During the two weeks leading up to Remembrance Day, Canadians pin red poppies to their clothes as an act of remembrance. (In fact, I was in a bit of a panic the day before because I had lost my poppy. It fell off my jacket while I was adjusting my camera bag and it blew away in the wind. You can't go to a Remembrance Day service without a poppy. It just isn't done. Fortunately I found a bookstore that was selling poppies and I was able to replace it.) After the memorial service, people leave their poppies on the Tomb of the Unknown Soldier, located at the foot of the National War Memorial. Men and women in uniform would stand to attention and salute the tomb before placing their poppies. Of course, the place was crawling with photogs. I came back to the memorial later that night. There were still people putting poppies on the tomb.