GOLDENORFE Super ModeratorSuper Moderators Posts: 4,747 moderator
January 15, 2012 edited May 11, 2015 in Holy Macro
There was a really good hard frost last night! so i was lying on a plank of wood in the freezing cold early this morning shooting these shots! lol Must be MAD!
I Dont often get the chance to shoot them , so made the most of it! 521 frames shot in three freezing cold hours! eventually i could not feel fingers or toes! Haha.


This is a focus stacked frozen dewdrop. Dew forms naturally on the tips of blades of grass on cold nights after a warmish day.
shot at x4 magnification with canon mpe-65 macro lens. the depth of field is so shallow at this high magnification that focus stacking is used to increase the dof to cover all parts of the frozen drop. 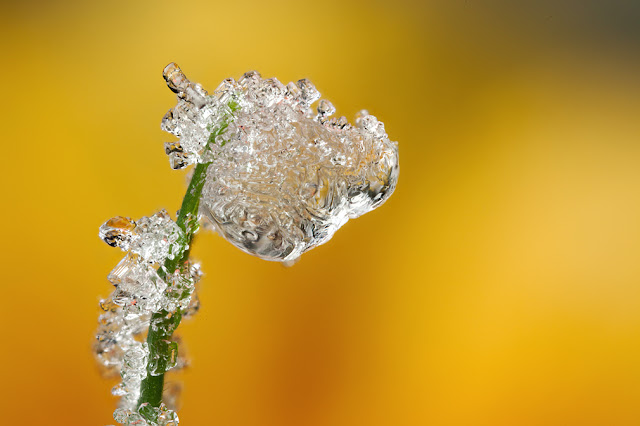 This is how its done!


Once a good dewdrop has been located on the lawn, i then place a small flower,( a primula in this case ) just behind the flower to give background colour. in a non frozen dewdrop, the flowers image is refracted inside the water drop. moving the flower back/forward will alter its position in the water drop , so can be moved slightly to give the best resulting image inside the drop. 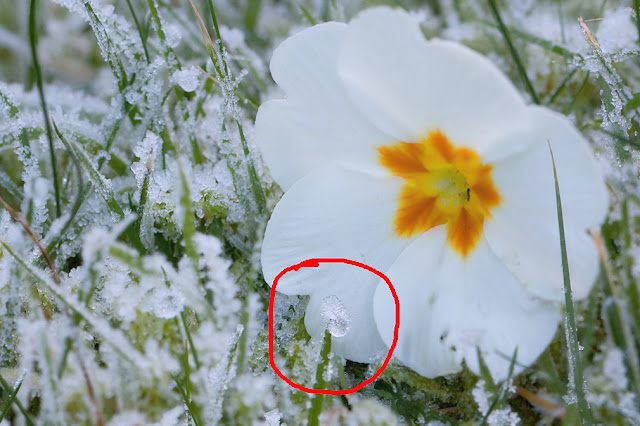 Here you can see how close the flower and drop are to each other, and the approximate angle position of the mpe lens when shooting. i use a large plank of wood to lie on ,and rest lens barrel on left hand to keep stable!
a series of frames are then shot , each with a slightly different focal point until all parts of the subject have been shot in focus. typically 8-14 frames at f7 should do, i align one of the crosshairs in the viewfinder to a noticeable part of the drop so i can keep all the frames fairly well aligned when shooting. 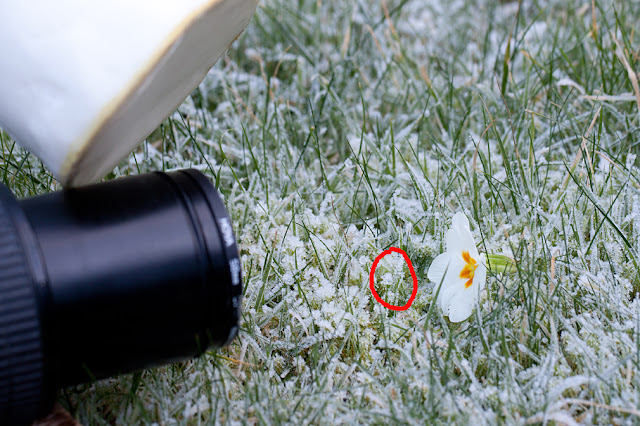 Here is the flower/drop used for this sequence of shots. 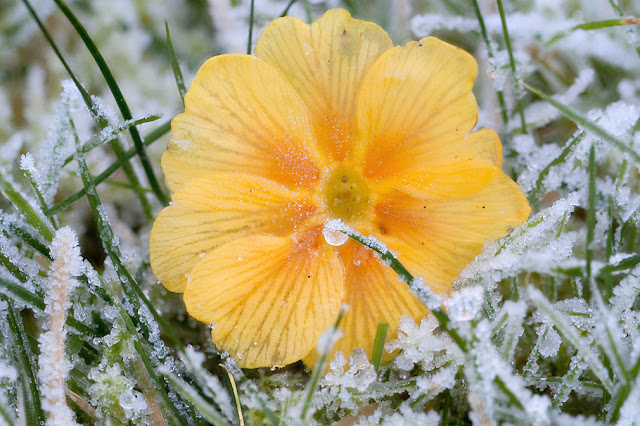 Here are 4 of the individual frames , i used 8 in the final image. you can see in each frame the slight differences in focus point. 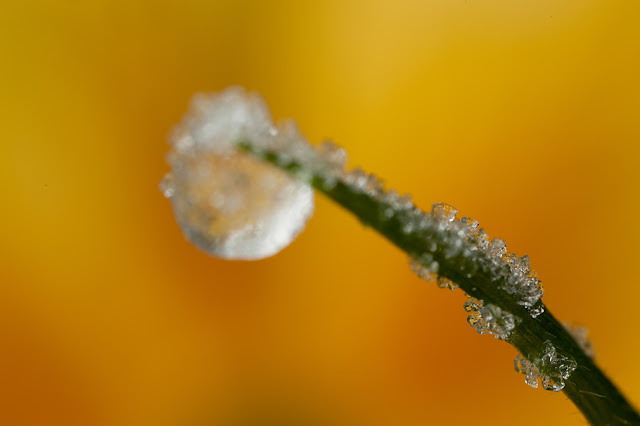 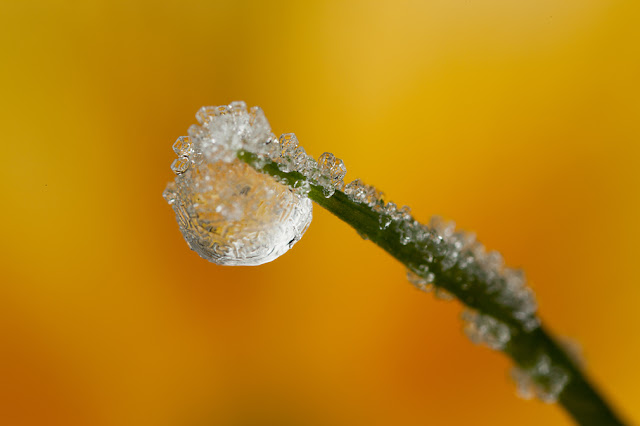 the focus point in the next 2 frames was very slightly different on the main frosted drop. 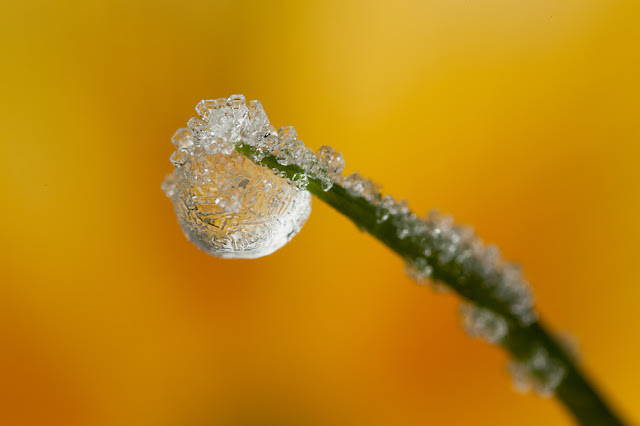 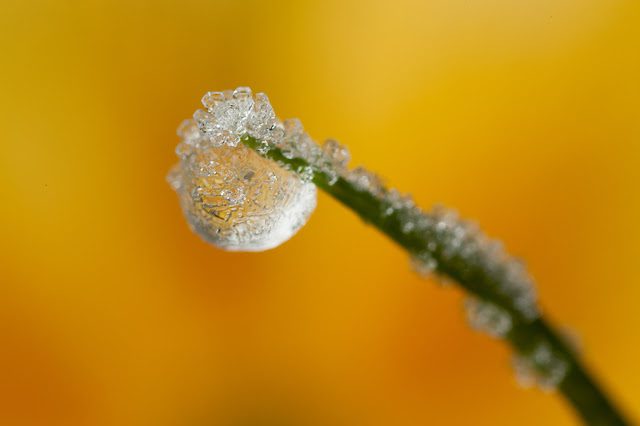 All 8 individual images are then stacked in "zerene stacker" to produce the final image, with significantly greater depth of field than a single shot could produce at this magnification.


I shot 11 frames , but chose to leave out 3 so the image has a natural dof, with the lower blade of grass out of focus. 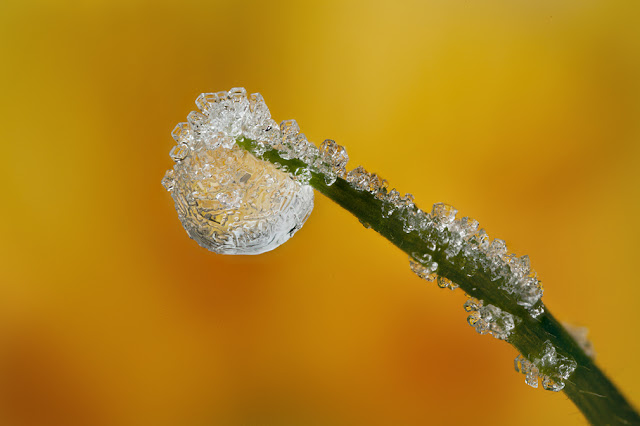 Here are a few more that i shot 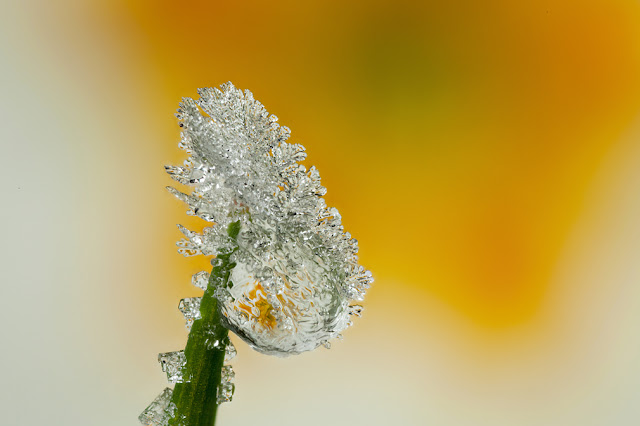 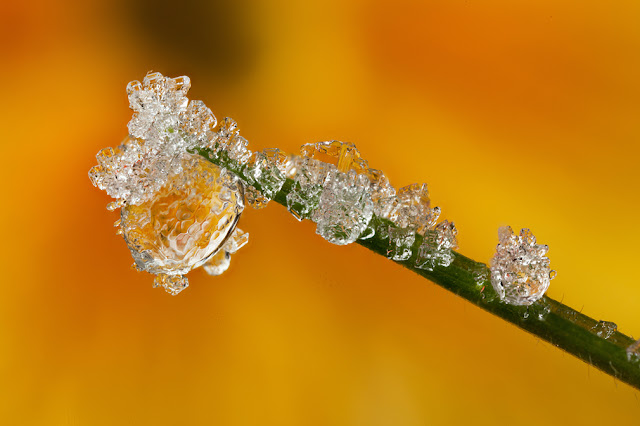 a crop from above shot! 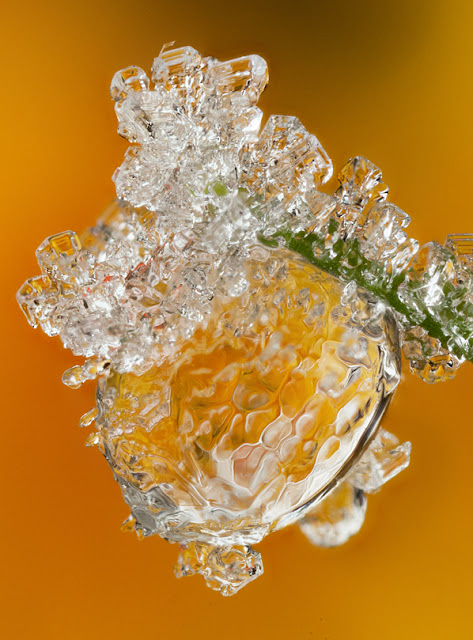 I will post the best shots from today in next blog!
shot after i had warmed up a bit!!