grandmaR Major grinsRegistered Users Posts: 1,903 Major grins
March 3, 2014 edited April 11, 2014 in Journeys
Bob decided he'd rather stay in one place for a week rather than go to a different place every night on a ship. So I booked us for a week in St. Croix where we have only been once for a day (on a cruise). We stayed the night before the flight at the Hampton Inn (where we could also leave the car for $5/night). 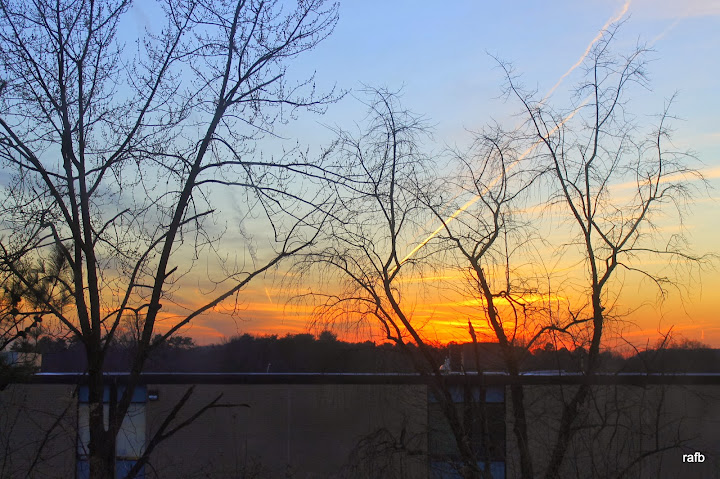 We went to G&M's for dinner and Bob had the Maryland crab soup, and the $15.00 crab cake sandwich. He got fries with that. As usual he ate the crab cake (with the cocktail sauce) and not the bun 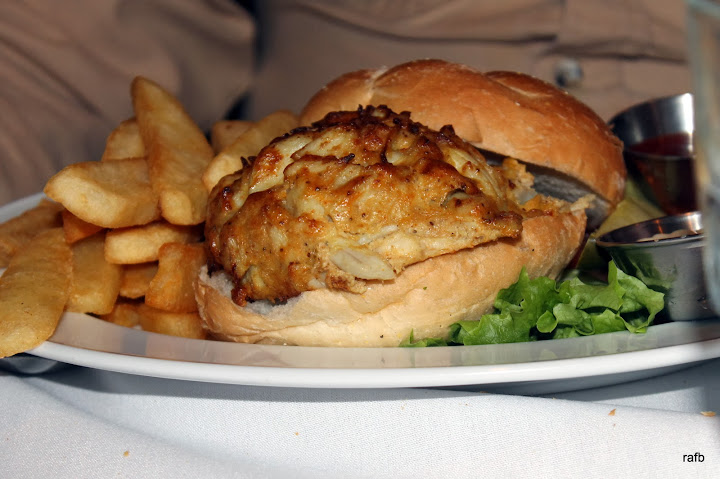 I had the broccoli Alfredo which was the special for $12.00. We didn't have dessert.

When we got back to the hotel, I looked for the cord to download the photos from the camera and could not find it. (Last time I lost my lens cap)

Bob helped me and we took my suitcase and carry-on and pocketbook all apart, and finally we found it where I put it in with the snorkeling camera.

Saturday Feb 1
Bob went and got me a bagel and a banana and cranberry juice for breakfast and I got dressed and repacked my carry-on bag and we were out in the lobby about 8 for the shuttle to the airport. We are taking the new scooter in its suitcase so we can check it. The scooter is in the big bag with the rainbow strap 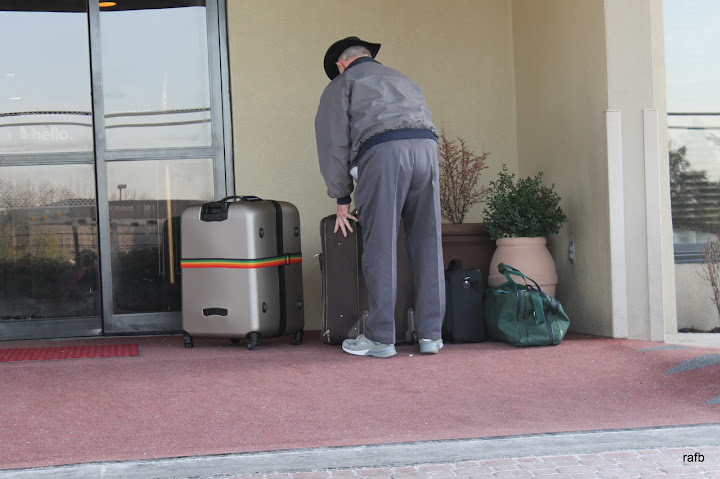 The guy dropped us off at the airport at about 8:15, and the wheelchair and gate check guys came out to get our stuff. Then there was a problem with the scooter. The lady said it was non-powered, right, and Bob instead of saying that it was not powered now, said that it had a battery.

It took several phone calls before they finally allowed that if I put the battery in my carry-on instead of in the bag with the scooter (and the scooter bag weighs 81 lbs with the battery), that I could carry it on. In order to get it in there, I took out my hairbrush, my inhaler and my power strip and put them in with the scooter.

We were still two hours early for the flight. Bob went and got some water in one of the water bottles. and I sat and read my Kindle which is really the first time I've used it. 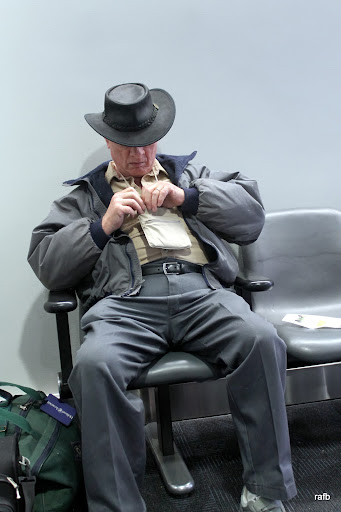 Bob putting his money/passport back in his pouch

BWI has this black stealth tower 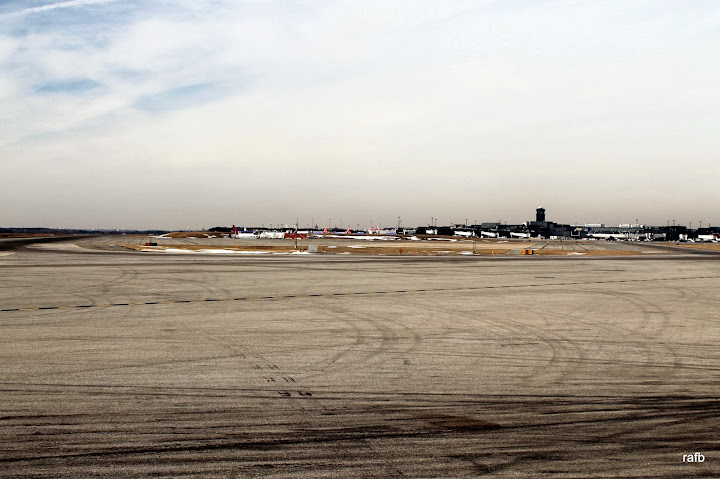 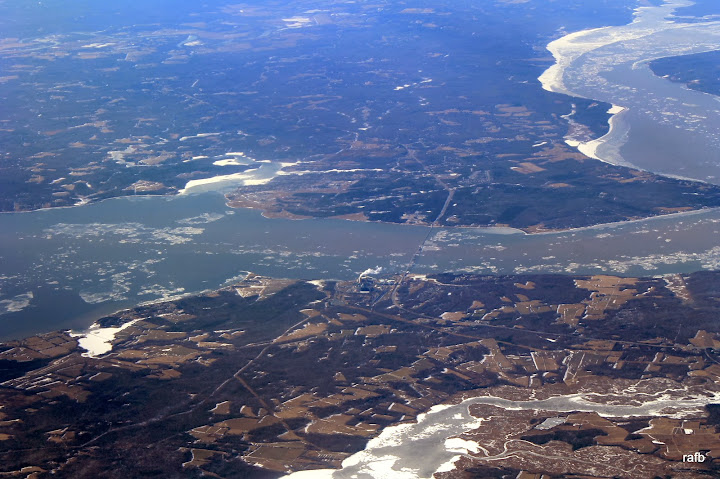 This is the Potomac River and the US 301 bridge crossing it. If you look next to the bridge you can see the steam coming from the smoke stacks of the Morgantown MD power plant which is on the south Maryland side of the bridge. 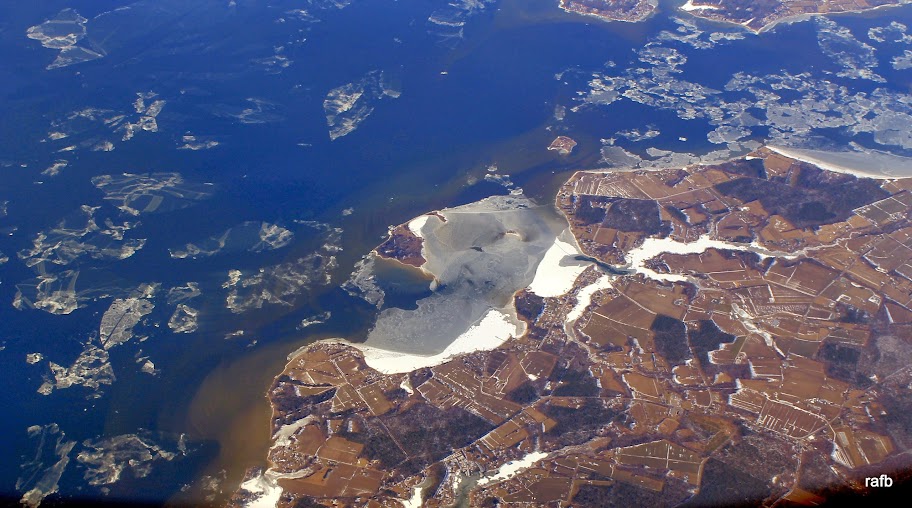 The island here is St. Clements Island which is where the first Maryland settlers landed. It has been eroded since then. 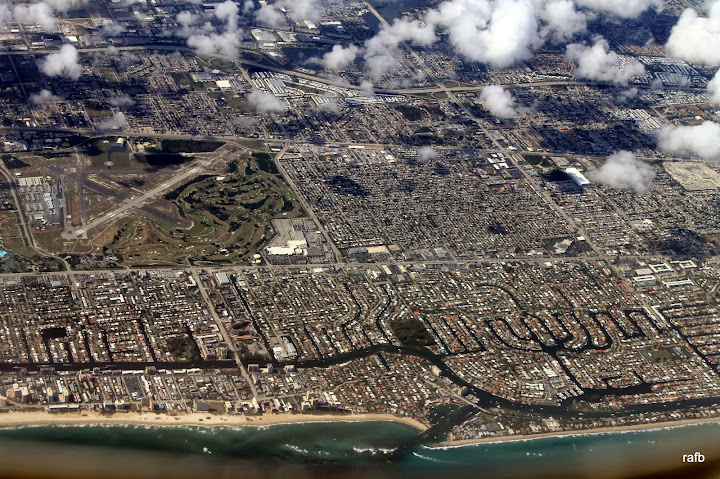 and Fort Lauderdale's Port Everglades with no cruise ships in port 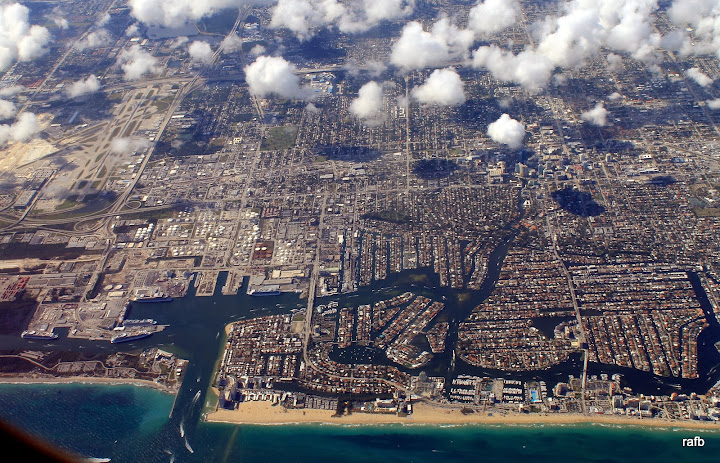 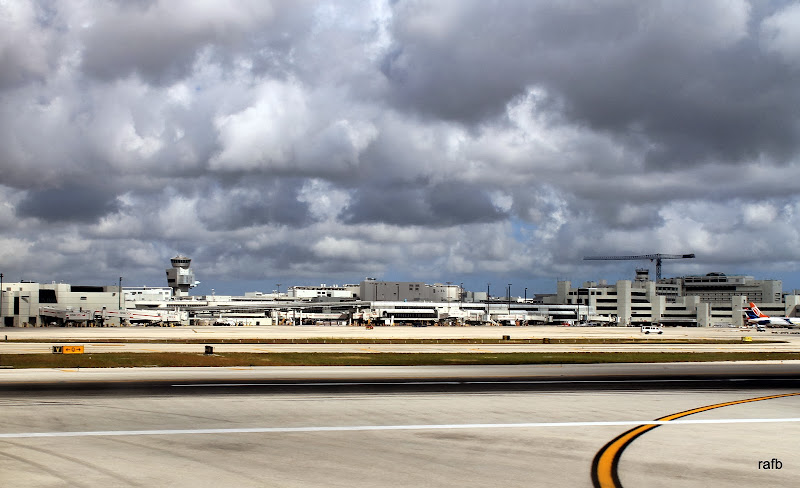 (I told Bob the pilot must have been a Navy pilot because he set us down HARD). I was met with a wheelchair and the wheelchair guy took us on the Skytram from gate 11 to gate 46. 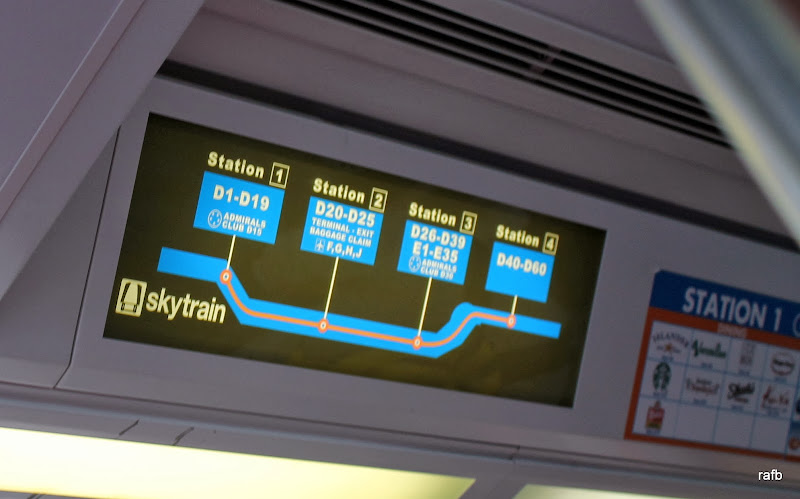 After we got to the gate, I went to see what we could get to eat and told Bob I wanted a spinach cheese turnover, and he must have gone to a completely different place - he got two submarine sandwiches and two bottles of juice. We ate one of the subs for lunch. Then I went to go to the bathroom and got lost on the way back. I asked a wheelchair guy and he put me in the wheelchair and wheeled me back. 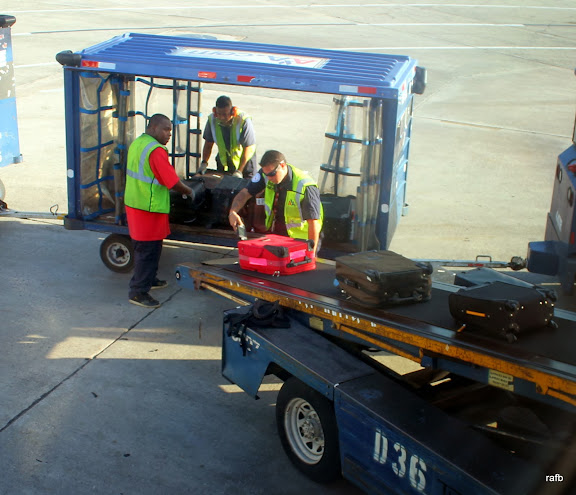 Finally our plane was called - it wasn't full. I saw them load the Luggie scooter and Bob's bag (his is the brown one in the middle of the conveyor) but didn't see mine

The sun set and it got dark. I finished reading another book on the Kindle.

We landed pretty much on time. The guy at the bottom of the gangway with the wheelchairs wheeled me in to the door into the airport which someone had to let us in. Then he stayed at the door to let the flight crew through and the door lady wheeled me in to the luggage claim. I saw Budget on the way and told Bob to go get the car. (Bob at the Budget window) 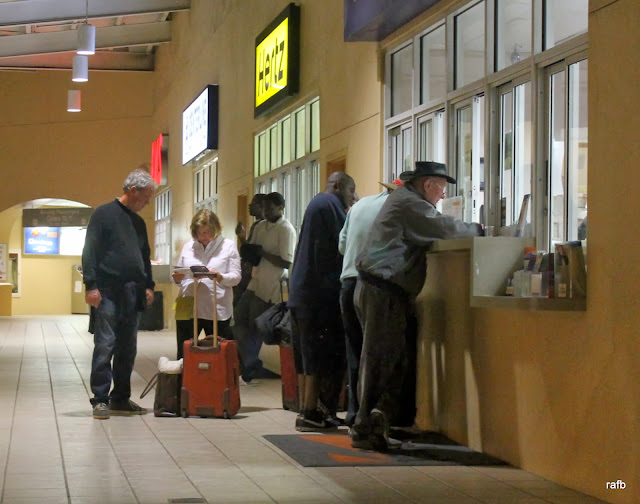 Which he did. I stayed with the luggage. The Luggie came out first and a 'red cap' put it on the cart. Then my bag came and then Bob's came last. We got everything into the car. (Our rental car license) 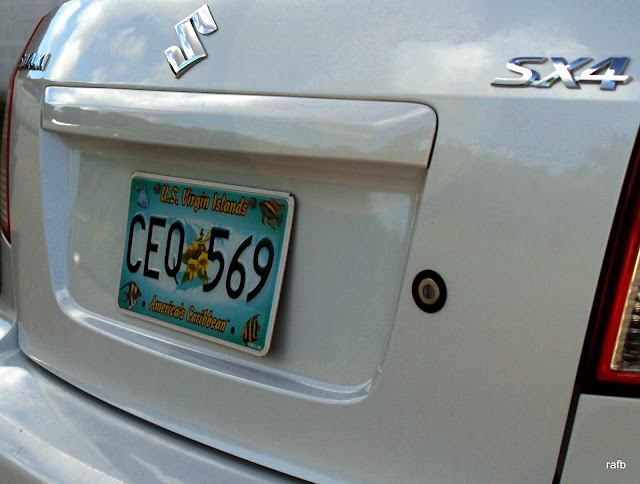 It was now about 9 pm Atlantic time. We asked at the exit gate how to get to the highway and managed that OK. Then the second turn onto Queens Highway - that went fine. I thought to turn on my phone and allow it to find us and when it did, we were in Christensted. We had gone too far. So we turned around to try again.

We ended up back near the airport. We went into a convenience store/gas station to ask. He basically told us to keep bearing left. He also told us that the Hibiscus Beach Resort (where we were staying) was in Princess. So I asked the phone to find Princess on the map. It did. But somewhere we went wrong and turned too soon or too late (keep in mind that Bob is driving on the left and all the headlights are glaring in his eyes because the cars are LH drive from the US with their headlights pointed to the right), and the roads are twisty and narrow and have no road signs. I am trying to figure out where we need to go on the phone.) This time we ended up at a gated community.

The guy that was there gave us additional directions (and actually followed us to see that we found it). Later, when I looked in the glove compartment I found the directions that Budget had given us to get to the hotel all underlined so we would know the right way to go.... except I hadn't known it was there.

At the hotel there was a NY number to call for after hours (I had tried the regular number but it didn't answer). The man came down and gave us room 20. He also gave me directions how to log into the internet. We were to have been in Room 1 which I could have driven to in the scooter. Room 20 had three huge one foot high cement speed bumps to be traversed. No way could I do it on the scooter.

We brought in all the bags except the scooter and unpacked. Since we did not bring in the scooter bag that meant that I didn't have the cord to download photos from my camera. Which is why I didn't download the photos until Sunday morning. I did log onto the internet and we watched TV. 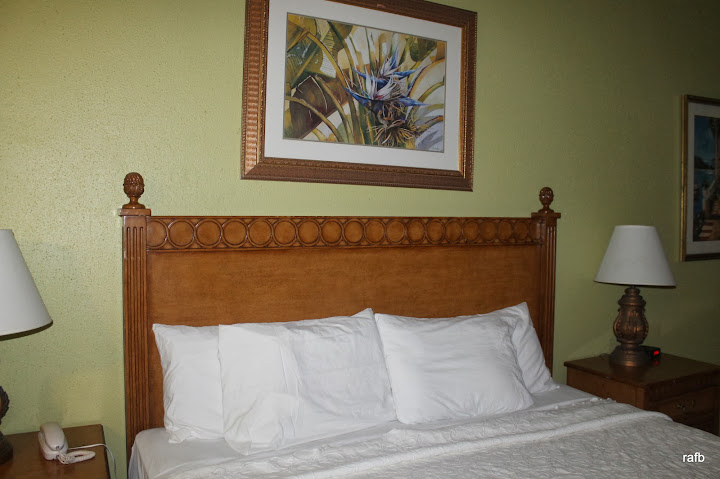 We had a small fridge 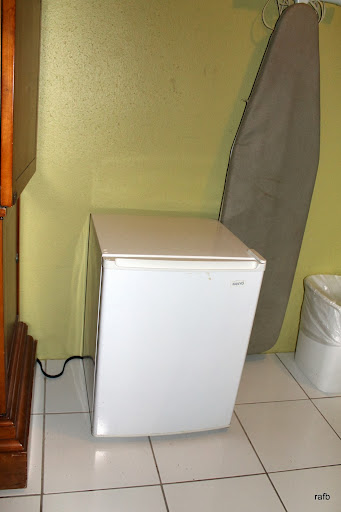 And a coffee pot, but no microwave 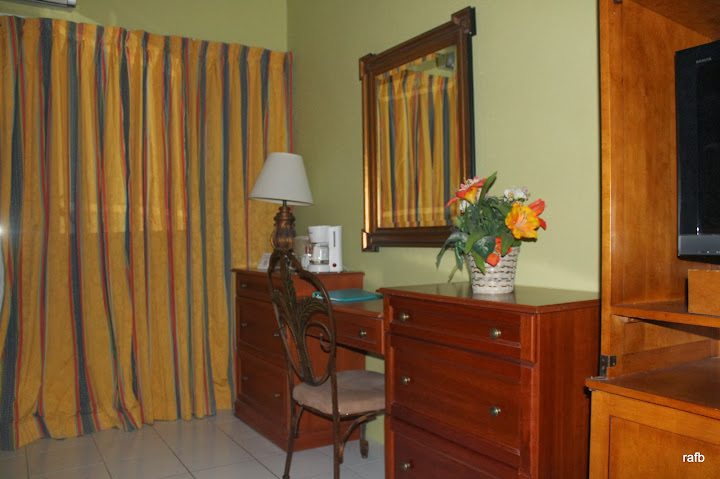 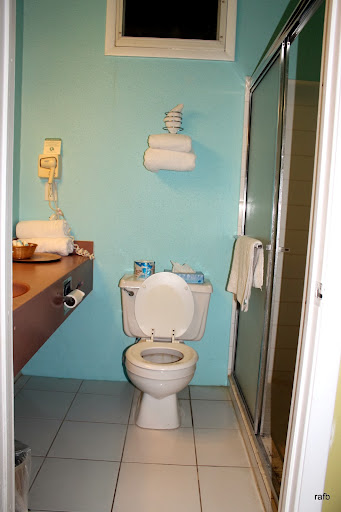 Sunday Feb 2
We got up late as we were up late last night. Bob went and got the scooter bag (which had been opened by the TSA) and my pocketbook out of the car.

Bob wanted to get breakfast at the restaurant so we walked over. The office was open, so we went in and finished registering. We also got keys with the correct room number (ours had been for room 19)

We asked about getting a second washcloth, how to turn on the A/C, and whether they were having regular breakfast or Brunch. That was when we found out that the restaurant was closed. They recommended that we go to The Palms, which we did.. 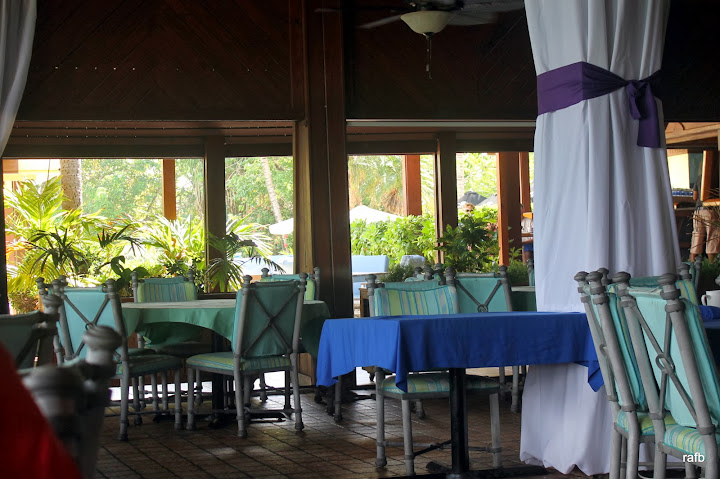 I had Eggs Benedict 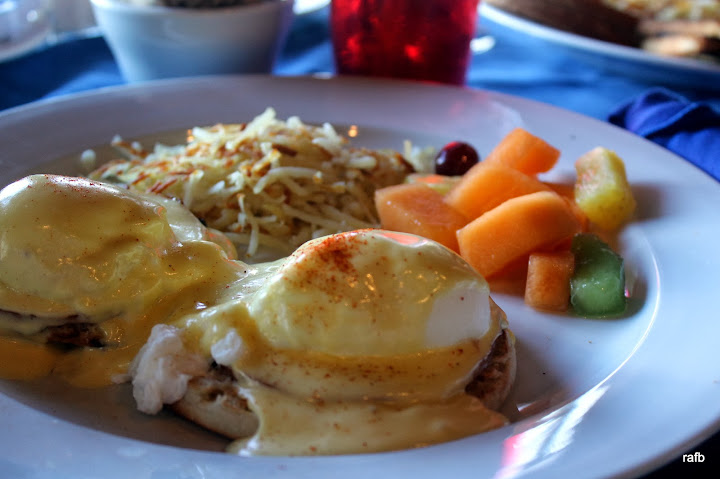 and Bob had scrambled eggs. 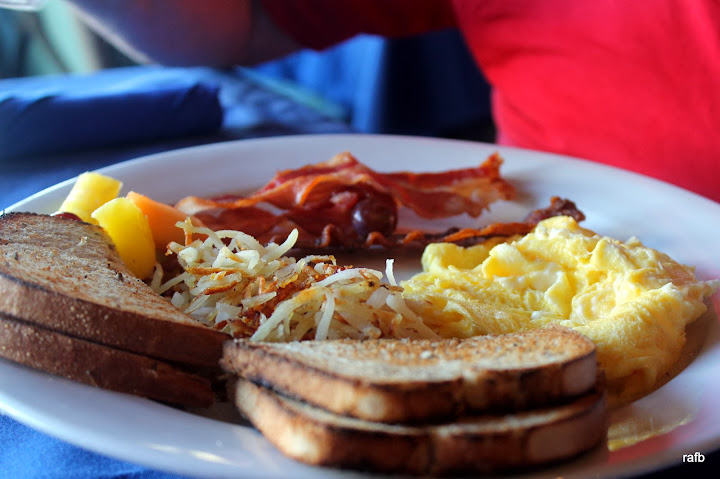 I decided to go to Kingshill Cemetery as it was big enough that I thought I could find it. After a few wrong turns, including going down a road labeled Drit Road (which I think was meant to be Dirt Road as it was worse than the roads in Costa Rica), we did find the cemetery. 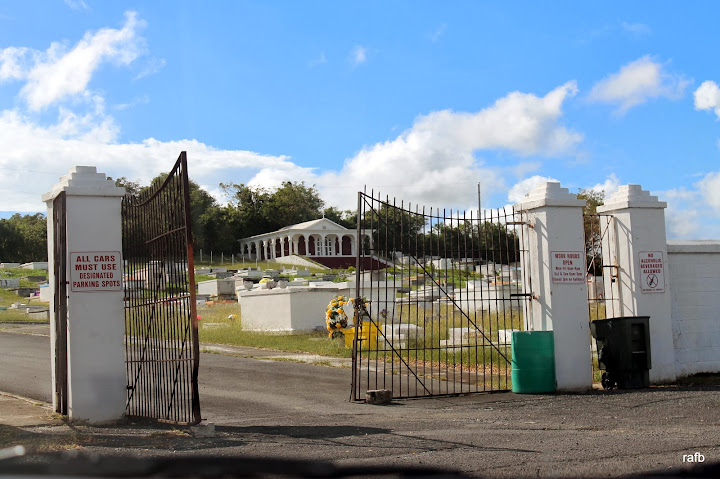 The gate sign said it was open on Sunday until 3 and since it was already 3, I was afraid to leave the car in the cemetery for fear we would get locked in. Bob got the scooter out and we started off in opposite directions to take photos. Bob of course was walking along among the graves taking individual photos. He was apparently in the section of the cemetery where the people who died in 1977-1982 were buried plus there was a section of tiny graves of babies. 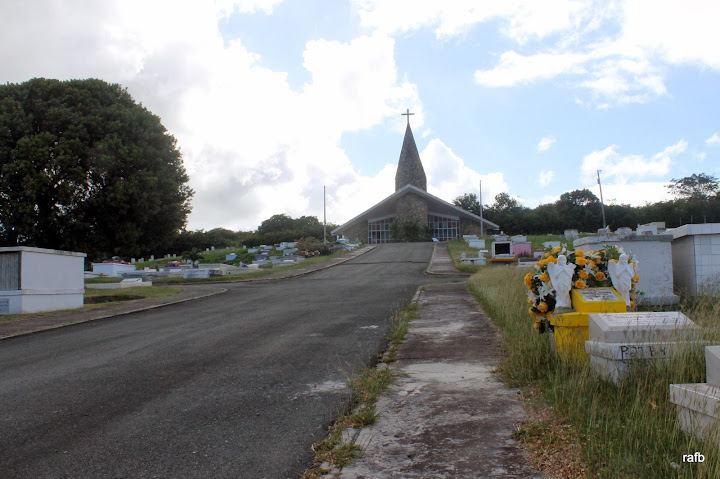 Among other things he was a US Virgin Islands elected governor and the St. Thomas airport is named for him. 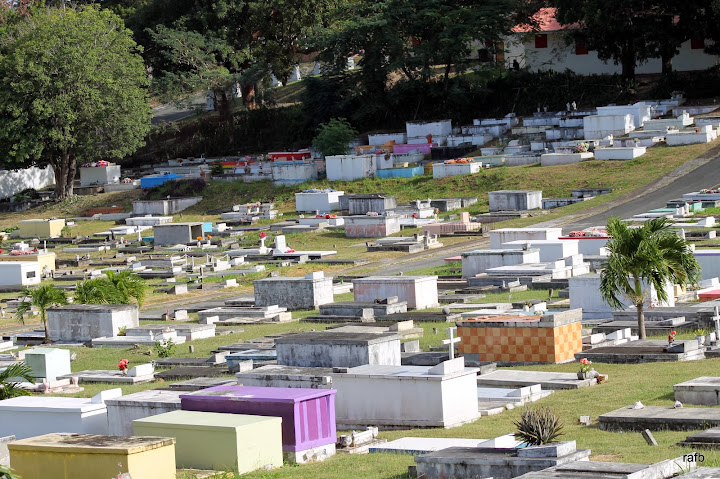 Meanwhile I took what photos I could from the scooter. I eventually figured out that I could get over the speed bumps without grounding the scooter if I got two wheels on the cut-out which I guess they have for bicycles. I saw another road farther along in the cemetery but I would have to go out into the parking lot to get there So I did that. I buzzed along past a gate that was shut (took a photo of some horses that were grazing there) 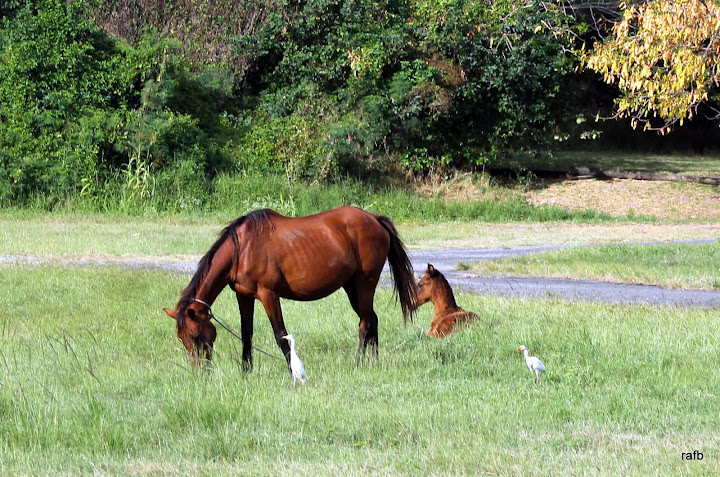 and into the far gate that was open. After I got back to the car, I was going to call it a day and then I saw some military markers and they are very nice and readable. I went up to that section. I had to get off and push the scooter up the last bit of the hill. I didn't take photos of all of them - my back was really hurting. Bob in the red shirt in the cemetery from the car 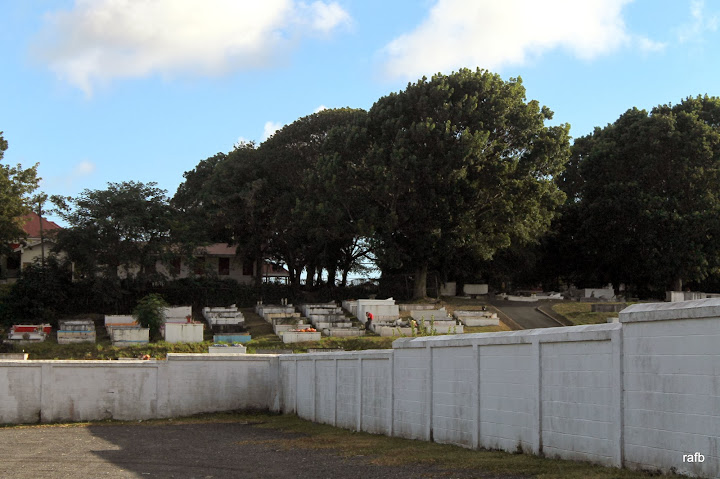 After Bob came back to the car, we decided to find a market. Eventually got to a big market and Bob went in and got us something to eat for breakfasts and lunches. Then we went to McDonalds and each got a 1/4 pounder and Bob got a milkshake and I got a McFlurry.... And we did get back to the hotel. 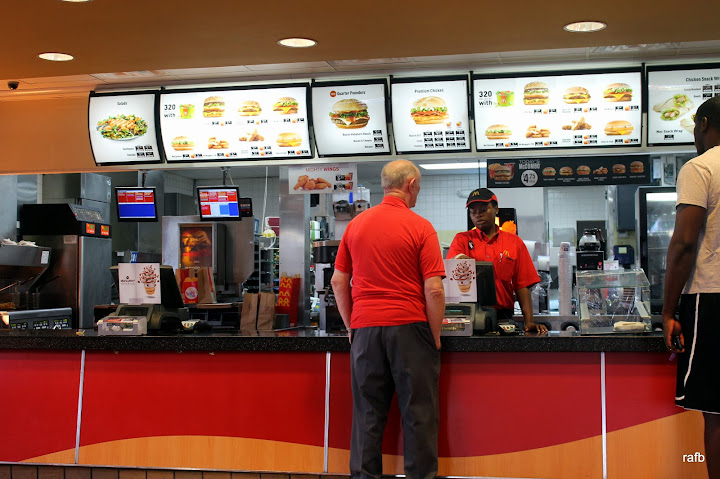 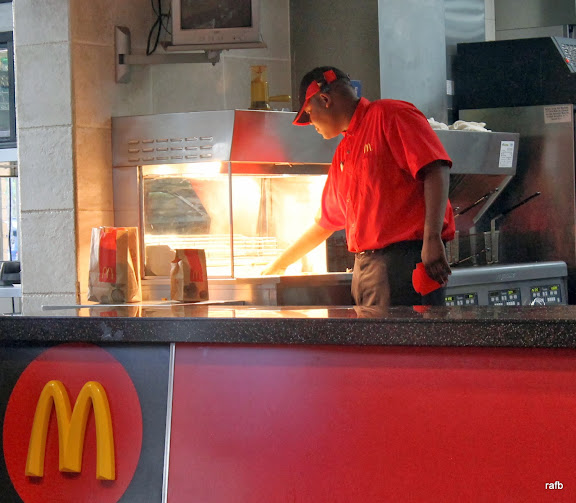 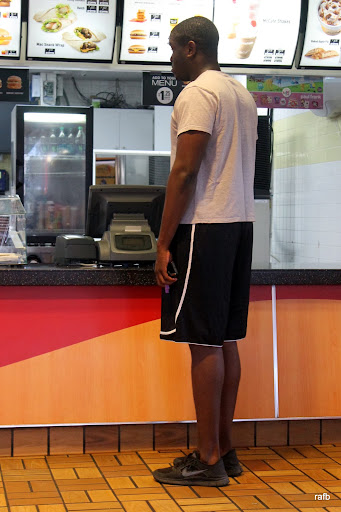 but decided they didn't tell enough of a story.

Stowed our stuff and ate the food and then I started downloading photos and processing them. And watched the super bowl and charged camera batteries.

They fixed and turned on the AC but we do not know how to turn it off and it is way cold. We did turn off the ceiling fan, but Bob had to get out the blankets to sleep under.
“"..an adventure is an inconvenience rightly considered." G.K. Chesterton”
0