Caving in the Ukraine

After the fantastic congress of Speleology I had another adventure to look forward to, as on Sunday morning I would be boarding a train to the Ukraine. We started out at the Congress grounds where we gathered with two Czech cavers, Ivan and Olga who would be going caving in the Ukraine with us and would help us get on the train in Brno. It was a short ride by bus to the train station and since the bridge going into Brno was undergoing construction we were at a smaller station just outside of town. Here we caught a train to Bratislava in Slovania where we had to tranfer to a different train for the ride to the Ukarine. Riding a train to parts of the former Soviet repulic was a unique experience as we were to find out because in the middle of the night while crossing the boarder not only did we stop for the usual passport and immigration check but they have to take the wheels off the train. It was here though that we had a major setback. One of our cavers had lost his passport! Probably while exchanging money in Brno. So he was not able to enter the Ukraine and would have to return on a different train. Meanwhile the wheel changing continued. They had jacks built alongside the tracks that lifted the cars high enough to slide the wheel carriages out from under then a large crane swung different wheels into place on the track to be pushed underneath. With these new wheels we were a match for the different sized rails that ran all the way to Moscow and beyond (though I was told that was as far as this train would go)We weren't going that far though and a few hours later we sleepily disembarked in Ternopil where we were met by Iryna, her sister and Their Dad, our host Volodymyr Kompaniyets.

The wheel on the train, go off?

What I didn't realize before going was the extent and maze like structure of these caves. We had the opportunity to visit several caves each of which was in the area of a particular Speleology club that managed, surveyed and mapped their particular cave. We started with the one that was a short walk from where we were staying with our host Volodynyr Kompaniyets. They had established a summer home as a cavers camp with multiple beds and a dining room large enough for all of us to gather for some great home cooked meals that his wife prepared for the group. His Daughter Iryna had gone to college in England and so was our primary translator for those of us who didn't speak Ukrainian. Back to the cave, the nearby cave was Mlynky cave which had an entrance just a short walk up the hill from where we were staying. First though we stopped across the street at the Chortkiv "Crystal" speleology club house to meet our guides and look at the map of the cave. This cave had an impressive mapped passage length of around 50km. Looking at the map it was apparent that the cave was formed mostly of numerous fissures running roughly SW to NE with occasional cross passages linking them up. The first section of the cave was fairly muddy but we soon progressed beyond that and got to see plenty of the dryer sections. I asked about how they managed to navigate through some of the more maze like sections and was told members of their club start learning the map of the cave at around age 12. After showing proficiency with a map they are taken on trips until they can lead them without getting lost. Our first trip did not reveal a lot of formations or the gypsum crystals that I was looking forward to seeing but it was a very enjoyably introduction to the gypsum caves and we would be back to this cave in particular.

Speleo-house our lovely home for the next week.

Next though we drove to the Khmelnytski region of the Podilskyl district. Here we were to visit the Atlantyda cave. This cave was discovered while quarrying gypsum so the entrance is in a quarry wall. This cave was apparently more hydrologically active as the passages didn't follow the fissures in line quite like they did in Mlynky and this meant that there were several much larger rooms and "galleries" that were very impressive to see just for the scale. The cave covers an are of over 4000m2 and has a volume of over 11000m3. Once more on our schedule we were only able to see a small amount of such a large cave but it was impressive. Especially so as I got to see the gypsum "flowers" I had looked forward to seeing.


The next day we did some sight seeing and visited a couple of tour caves, the first was a gypsum cave " Cryshtaleva cave". This cave showed similar SW to NE fissure patterns to Mlynky cave but had lighting and a trail installed. There were even numerous souvenir and gift sellers around the parking area. The cave itself was quite impressive with lots of Gypsum formations and I bought a dvd that shows these very well, unfortunately it is in Ukrainian so I cannot tell you what the narration says. The next tour cave we headed to was a different kind of cave. First though we stopped at a museum. The Borshchiv museum of regional ethnography had some good exhibits of the history of the region and included many items that had been found in or around the cave. Next we went to the cave itself, "Verteba cave", where we were shown were items of pottery, stone tools etc. that had been found along with human remains and animal bones there is a path through the cave and a nice display using statues and recreations of some of the pottery excavated to show how life for the people sheltering in the cave may have looked, during the late stone age to bronze age.


We took a break from caving to visit a couple of fortress in the region, the Khotyn fortress over the Dnister river and the Kamenets-Podolsk fortress, both of these were very impressive medieval style structures with a rich history going back a long way, Including the times when the Turkish empire had fought huge battles trying to conquer the region. We were also told these were the locations used to shoot several movies. 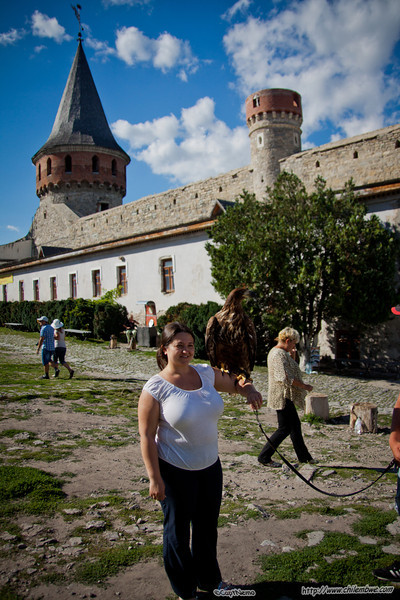 Our host posing with the Golden eagle

After our break from caving was a visit to Optymistchyna cave. Once more a close look at the map revealed the classic SW to NE fissure structure I was starting to recognize as being typical for the gypsum caves of this region. It was much harder to see though as the map was huge. This cave had been mapped for a total length of 238km. Once more on our limited schedule we only got to see a small portion of such a large cave but it was certainly worth the visit.
Our final caving outing was a trip back to Mlynky cave but this time we headed to some passages that Volodymr told us were some of his favorites because of the beautiful formations and sure enough there were some fantastic gypsum crystals and flowers to see.

Ludya posing in a glittering passage

All too soon it was time to pack up our cave gear and head home. I hope I get a chance to return to the Ukraine where not only were the caves wonderful to see but the friendliness of the cavers who showed us around and invited us to their club houses for drinks and stories in the evenings, made the trip truly remember-able.

Gypsum tinted black from manganese and orange from iron Group photo in the cave

Another group photo this time with speleo dog!

One of the many churches we saw. Statue entitled 'the tourist'- check out the camera