Alans Grin Major grinsRegistered Users Posts: 346 Major grins
October 27, 2015 edited October 29, 2015 in The Dgrin Challenges
Firstly I would like to thank and congratulate everyone that took part, my expectations have been exceeded with more postings than I expected on this difficult challenge / experiment.

Before making the top 3 selection I will comment on some of the images, and this is not because they are better or worse than the others but merely that I felt I wanted to say something and it perhaps makes the judging more interesting.

I claim no expertise or that I have a better opinion than anyone else. As always, what you feel about your own images is absolutely more important than anything I’ve got to say. I would also point out that this subject is perhaps a little more subjective than usual!

grandmaR – thank you, for as usual you lead the charge when it comes to contributing to any challenge. It was a relief to get first posting. The descriptions behind your photos are sad indeed and I like the idea of your before and after shots. A few years ago on a road trip I broke the journey to visit one of my old schools and for me it was an emotional mistake. I totally understand how you feel.

Peter – I really appreciated your “Dumped instead of recycled” and the “After the storm” photo. It’s always distressing to see so many trees destroyed and personally engaging for me because I had 6 fall into our property last year including one that hit the house – it was a very large and distressing insurance claim.

Paul – I consider all three of your photos to be really very strong. My apologies to all, but I feel compelled to take more than a moment to comment on the Dead Fox image.

I’m sure everyone will have different feelings about this image and I have acquaintances that might actually be happy to see this. For me it is shocking, powerful and does convey a strong message about urban / human impact on wildlife. In addition, and I could be totally wrong, technically this has the feel of a well-crafted shot of a difficult subject. Perhaps it is just a “snap”, but I doubt it given the angle, the perfect framing of the fox by the background car which is suitably blurred or motioned blurred. I suspect it was very much a well-considered take. It is of course possible it is a composite, but again I doubt it and in this case wouldn’t care anyway.

At competitions I often hear judges say – “What has the photographer added”, i.e. more than just simply recording something that was there, and anyone can press the shutter. In this case I would say Paul has “added” a lot and although unpleasant to look at, I seriously applaud him for this shot.

That said, I must now apologise to Paul and anyone else who tripped over my possibly poor challenge definition - “Distressing Places and Spaces”. However I did say “It’s all about negative environments” and I feel this image has drifted slightly too far to the fringes of the concept of being about “Places and Spaces” to be put in the top 3. Nevertheless, I am delighted it provided an opportunity to share it with us, and once again I applaud you. Your “Plastic bag, Sir?” is also a strong contender.

Jo – I really like the colour pop on your “Left-overs in central California” and enjoyed your other two as well. It’s very slight shame I can see what looks like a modern building on the left of the Murphy house. I generally don’t Photoshop, but might be tempted on this one if I had the skill. 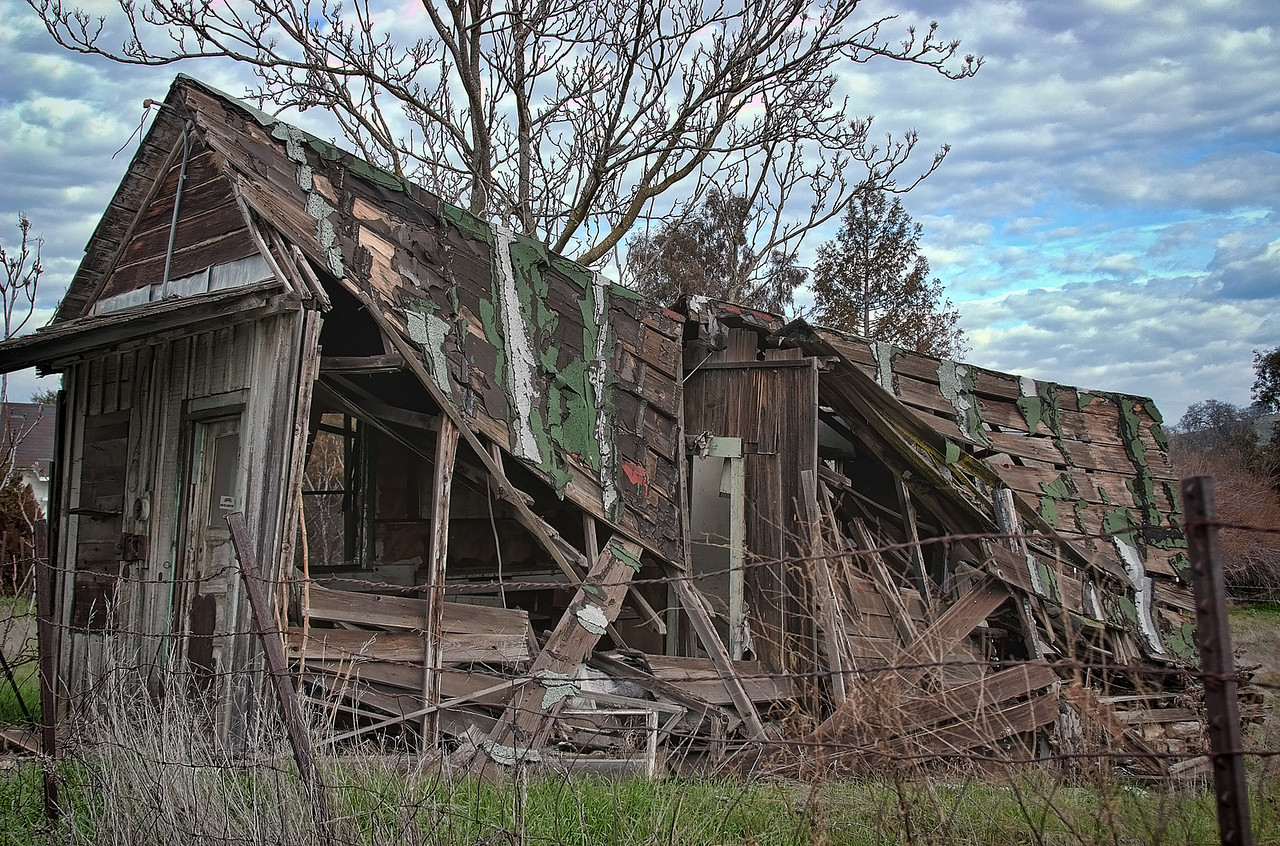 Jeroen – I liked your shots, particularly No 2 with its poster covered downstairs shops and boarded windows upstairs. All the odd angles on windows etc on the sagging and “propped up” (?) property add to the interest. 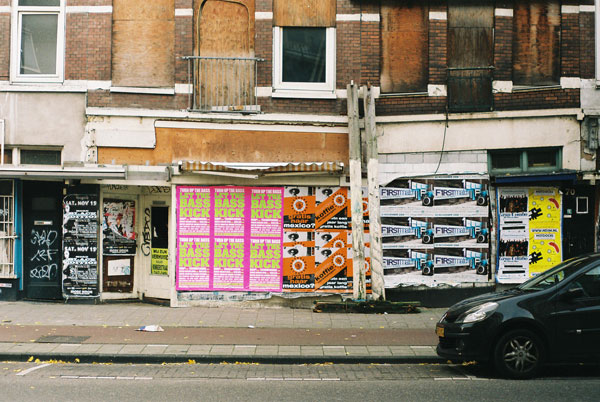 I would have liked to have seen a bigger version of this image so I could confirm my understanding of what’s going on here, hopefully I’ve got it right? A title would also have assisted in this aspect. For me, the shiny newish car in the frame doesn’t really add to it as it’s not a strong enough element to create juxtaposition and feels a little intrusive into the frame, but I appreciate it was just in the way.

Thelensspot – I really like the furniture plant image and love the high contrast processing you have done on it – great shot. I also like the paper mill and totally accept your comment that the bird was not added.

However since you mentioned it, and I admit it’s is late here as I type this, but to my eyes the sky looks slightly darker around the bird and it appears to have a 1 pixel halo all the way round (admittedly magnifying glass needed) so perhaps that is creating an impression it may have been added. I don't think its a serious issue but I do think something is going on here which makes the bird look just very slightly detached from the overall image.

I am probably totally wrong but I’m wondering if you have done some localised contrast, sharpening or clarity adjust and perhaps pushed it just a little too far. It reminds me of the kind of artefacts earlier versions of Lightroom (V3, process version 2010 and earlier) could create with the clarity tool.

My apologies if I’m wrong and sincerely sorry if I cause offence. I’m not trying to be critical here and it’s because I like the shot that encourages me to comment. I’d be interested to know your thoughts.

For me this is a powerful scene of Fort Rosecrans National Cemetery and I know if I was there I would be quite moved. I really like the ethereal feel you’ve created in this image - a mild infrared treatment perhaps? What I also appreciate is the way the horizon blends into the sky and creates an infinity feel and also that on first glance it appears that sadly only one grave has flowers on it – although there are actually others.

OK, enough rambling from me, it’s time to agonise about the top places – it’s been a tough call.

I really appreciated all three of your images, but your “Swan in Squalor” shot really struck a chord. This is a beautiful bird and both the ridiculously small pond and disgusting winter industrial/urban wasteland setting are jarring and creates strong emotional conflict. The only reason this is not higher in my top 3 is I feel your presence in the image very slightly acts to diffuse the impact and soften things – you look a kind caring person. To a small degree you are already acting as the sympathetic and helping observer – it is very slight, but I have to split hairs here.

This looks and feels a distressing place and although primarily a photo of a smashed up car with graffiti on the bonnet, there is certainly sufficient background and context to let me also know, and importantly feel, that this is probably a pretty unpleasant place to be in. Your composition gives the image strength and impact, and I also admire your choice of post processing to add to the distressed grunge feel. A “lovely” stunning photo. Your Ecological disaster shot is also strong too.

I surprised myself (and probably others) by choosing this, however for me this is a truly revolting and sad image with strong impact and is a reminder of how just a few people with no respect for the local environment (Places and Spaces) can create such disgusting scenes that others have to live with every day. I know Rats are natural creatures and could live there anyway, but they clearly add impact and imply filth and rubbish. I encounter “fly tipping” in the countryside around here and it never fails to sadden and I confess make me angry. It was well seen and well taken – great shot.

To everyone who took part, thank you again.

Over to you Paul for the next challenge.

PS - If I ever set a challenge again it will be something a little more cheerful!
0