This is a bit of an experiment, and my first time posting in Journeys, so forgive me if it all messes up!

My wife and I love kayaking, and have made a number of trips on the west coast of British Columbia. In the summer of 2018, we travelled with Kingfisher Wilderness Adventures into the Great Bear Rainforest on the central coast. I always paddle with my trusty Lumix Tough (Panasonic DMC-TS5), and on this trip I took along a SONY a6000 with a 50-210 mm and an 16-50mm lens in a waterproof Pelican case. This was an extended trip - 8 days totally off the grid and without any way to recharge batteries. I took 3 batteries for each camera, as well as several cards.

We flew from Port Hardy, on Vancouver Island, to Shearwater, BC, on a Grumman Goose. The aircraft was an experience by itself, being somewhat older that I am, and as you can tell from the photo, I am no spring chicken! 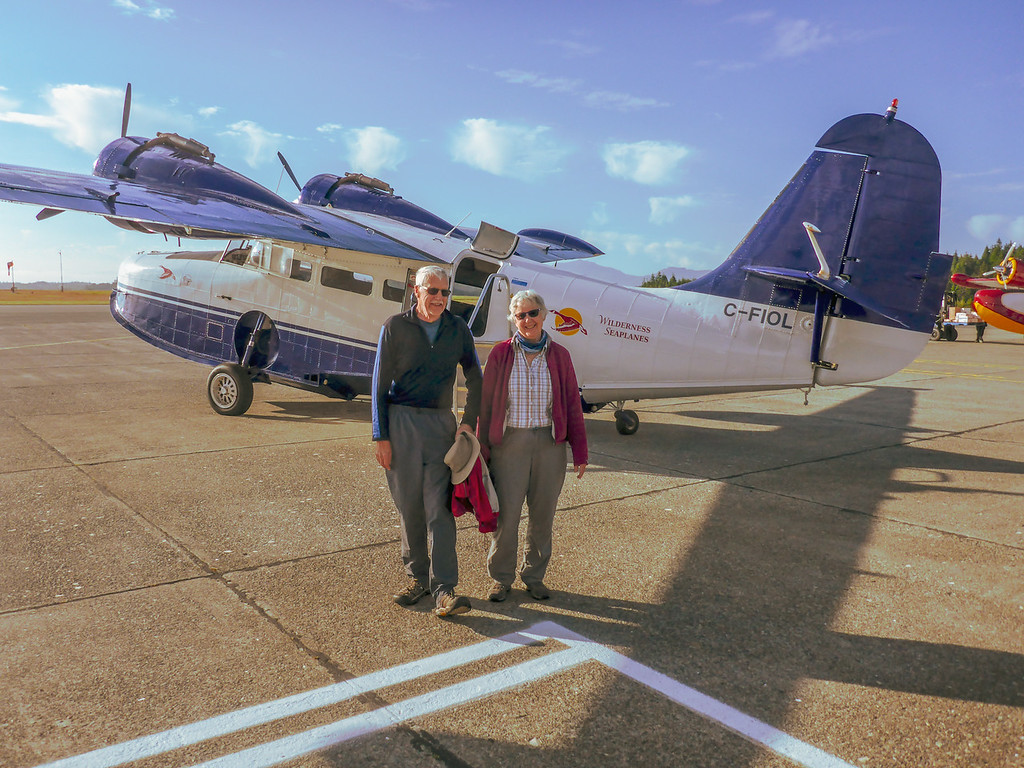 The Great Bear Rainforest region is spectacular from the air. 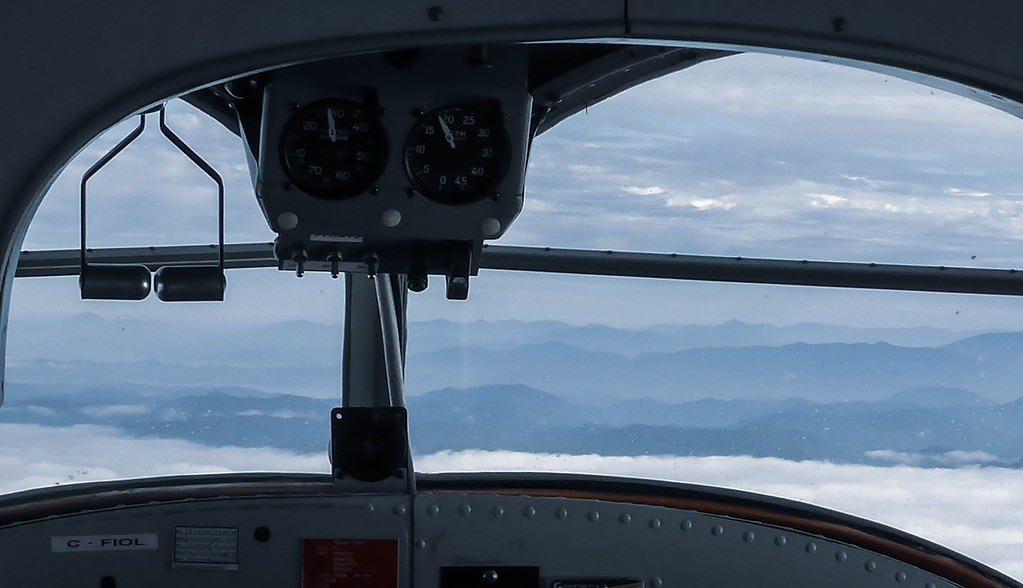 some smoke was visible, from forest fires in the interior of the province

Our route circumnavigated Swindle Island from Dallas Island, up Pidwell Bay, through Higgins Passage, and Meyers Passage to Klemtu.

The rainforest did live up to its name, and gave us a couple of wet, but not stormy, days

The beach at Wilby Point was easily the prettiest place I have ever camped, and I have lived a lot of my life outdoors.

The evening light was spectacular almost every night. 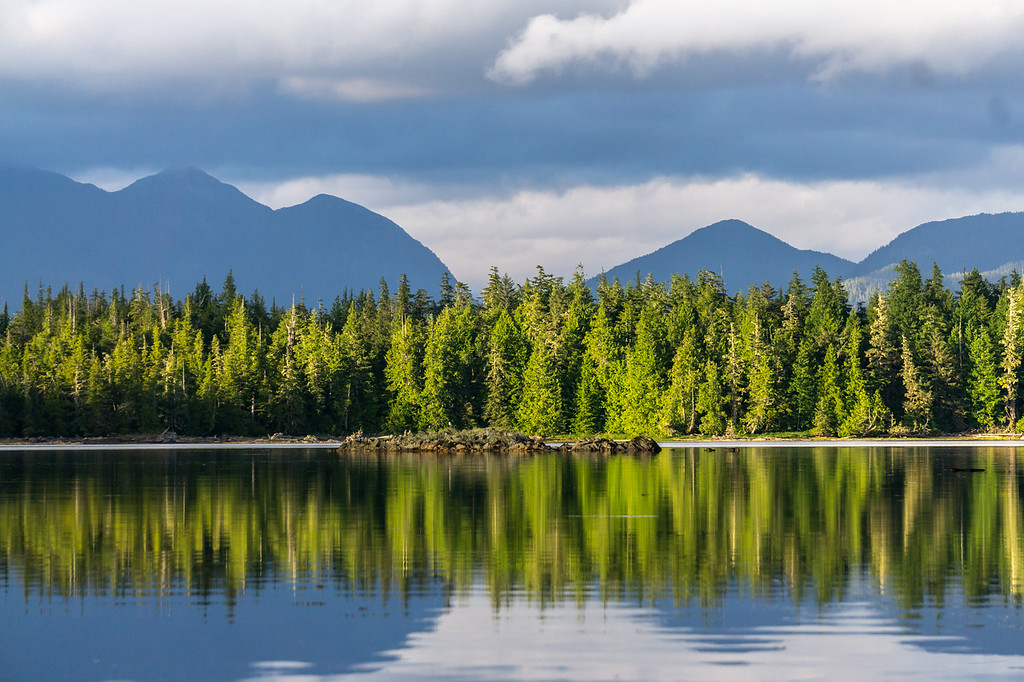 Every day started with hauling the boats from above the high tide line, back to the water for loading 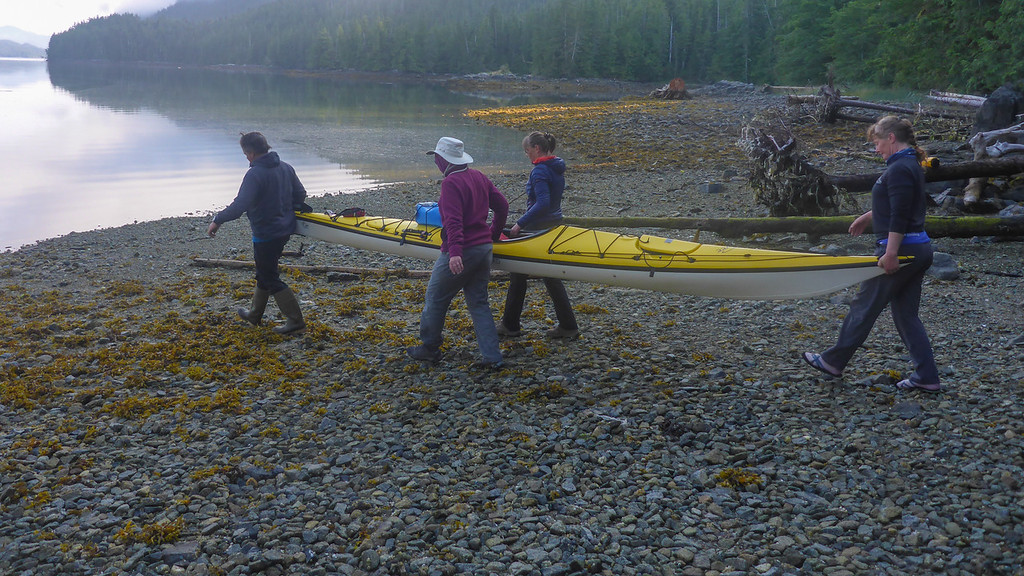 We saw humpback whales almost every day, wolves on the beach, sea otters, seals, eagles and lots of shorebirds. Unfortunately, we saw no bears, spirit or otherwise, but we were on the outer coast of the region, where bears are not prevalent.

On the whole trip, we were really struck by the lack of human evidence on land, or on the beaches. We saw one other person (a First Nations patrol from Klemtu), a couple of boats in the distance, and no evidence of humans on land. The beaches were remarkably free of plastic and other human waste.

The most difficult part of the whole journey was loading our kayaks onto the ferry for our return to Port Hardy. We walked out boats onto the ferry under the watchful eyes of dozens of clean, curious tourists who really had no idea of the adventure we had just had.

If you are interested, there are more images of this adventure at https://dave-gillespie.smugmug.com/Kayak-and-Canoe-trips/Great-Bear-Rainforest/

I thought I would add a few thoughts on kayaks, wilderness adventures and cameras. My thought in taking my Sony a6000, with a telephoto lens, was that I would be able to take wildlife shots from the boat. In our only truly close whale encounter, I only managed to get my camera out of the box and operating after the whale had surfaced 10 feet from Beth's boat, and disappeared. Beth's face tells the story,

Previously, the only camera I have taken on these trips has been the Lumix DMC TS5, which I like because it can ride in my PFD pocket, and is virtually indestructible (so far). The manual control of exposure is fairly good, even if images tend to be a bit noisy. I managed to get some nice shots with the Sony while on the beach, but wildlife photography from the kayak was simply impractical. Encounters tend to be very fleeting, and by the time I dragged the Sony out of the waterproof box and got it pointed in the right direction, the opportunity had passed. After a couple of these encounters, I stopped going for the Sony, and just enjoyed the moment.