This might sound silly, but lately I've noticed myself commenting about things that happened "last year" when I really mean two year ago. 2020 was a tough year for so many reasons, and I guess that we spent so much time "hunkered down" by ourselves that the year became a big forgettable blur. Well, there were some good things that took place last year amidst all the chaos and heartache.

One was that my niece got married. When my niece's fiancé Sam first proposed to her, they had talked about a late 2020 or early 2021 wedding. We were all excited. Then Sam (who is active duty military) got orders to be deployed. They talked about moving their wedding up to before deployment, but then covid became a thing and made a wedding something that seemed impossible to pull off.

Well, a random conversation between me and my niece just days before Sam was scheduled to leave on his deployment ended up changing everything. I had mentioned that the April 2020 wedding my husband had been asked to officiate for some close friends has been rescheduled because of covid. My niece didn't know her uncle was licensed to perform weddings. She asked if I thought Uncle Mark would officiate her wedding when the time came. I said he probably would do it if she asked him and then I made a joke that she might even be able to arm-twist her uncle's wife (her awesome Aunt Sherry) to doing the photography for her. We both kind of laughed and the conversation moved on. The very next day (Thursday), my niece called and said she and Sam had been thinking. They really wanted to get married before he left for his deployment. Would her uncle officiate for them and would I take pictures and by the way, can we do it Saturday? (Yes, this was literally the "day after tomorrow"). Let me tell you, it seemed impossible but she planned it and we all pulled it off. It was just my niece and her two children, her fiancé and his daughter, and my husband, my daughter, and me. We went to a public place outside and had the simple and quick ceremony on a sidewalk by the river. My niece found dresses for the girls at Target, she had already purchased her dress. She bought flowers from the floral department of a local grocery store and made the bouquets herself. My husband officiated; I took pictures; and my daughter held a zoom session on the phone so the rest of the family could watch. It was a happy moment in spite of the emerging virus situation.

Below are a few pictures I took to document the event. This happened in April 2020. I'm not sure why I didn't share any photos then, but I guess it might have seemed odd to post at a time when not much was going on because of shut-downs and shelter in place. I just noticed that there weren't many posts of any kind much less from a wedding in this section for 2020, so I decided to go ahead and post this. 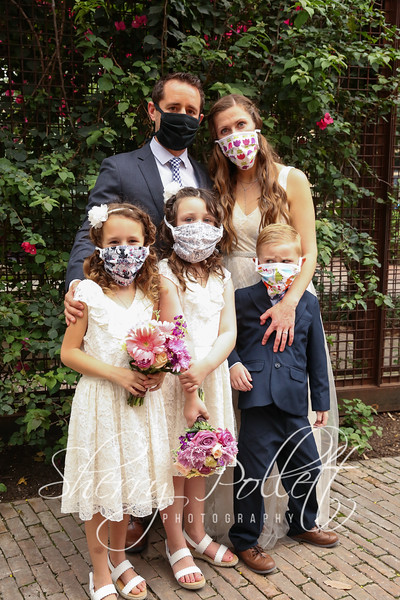 I hope that 2021 sees more of a return to "normal" whatever that is. Happy New Year all.