18) The end of the world: Santa Maria Leuca, the southeastern most point in Italy, where the Adriatic meets the Ionian Sea. The very end of the heel of the boot. 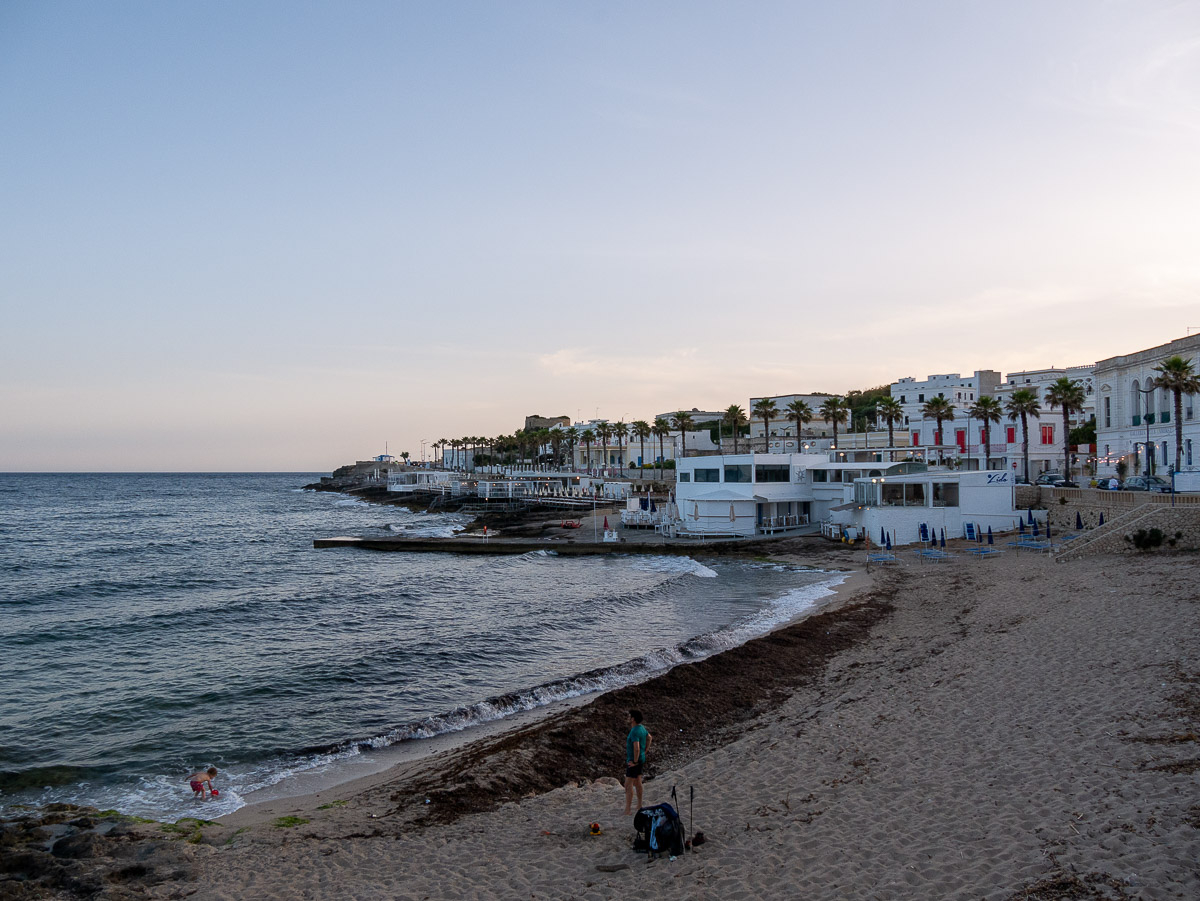 19 & 20) Puglia’s answer to California’s Highway 1: this is the one and only road that runs along the eastern coast of Puglia. It is somewhat hilly, doesn’t (can’t) always exactly follow the coastline and this time of year was lined with wildflowers and fortunately not too heavily traveled. And yes, that’s me in picture 20. 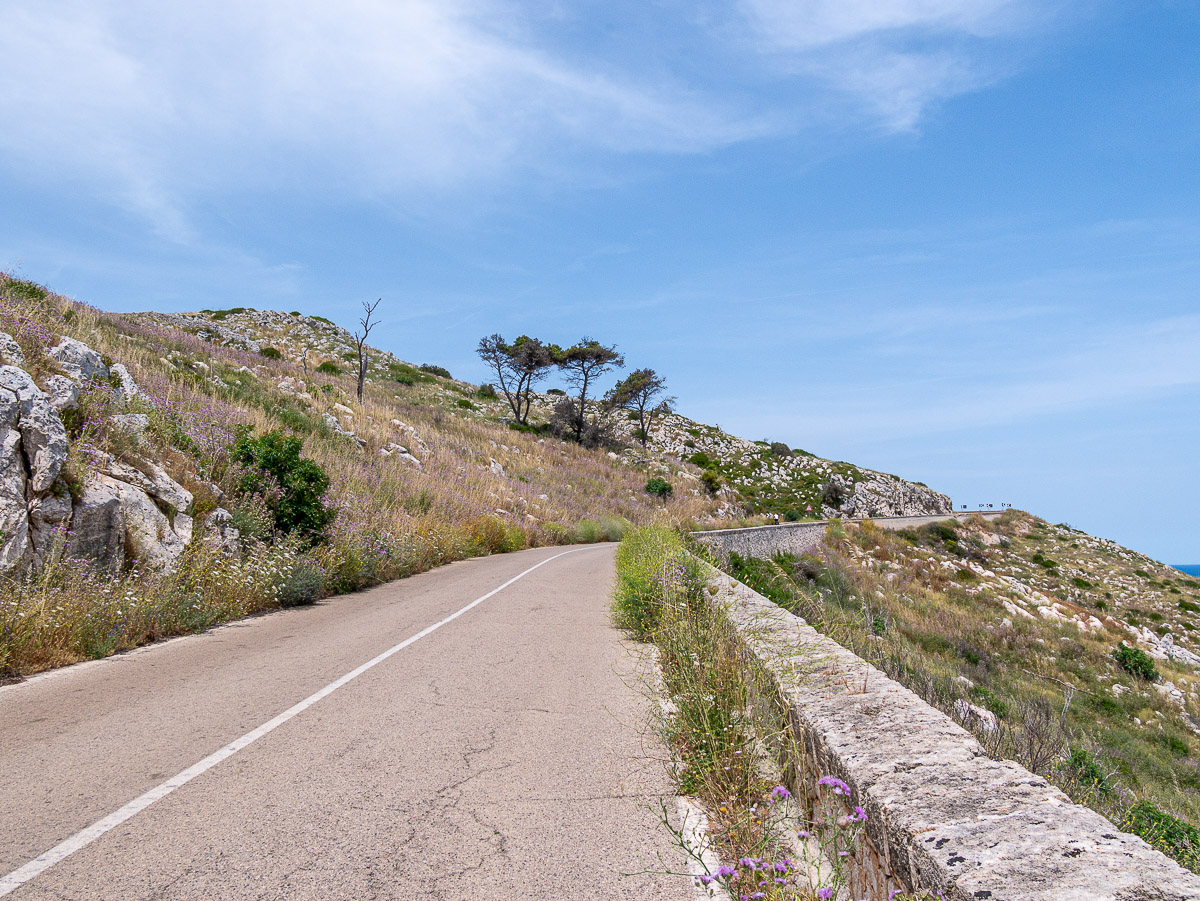 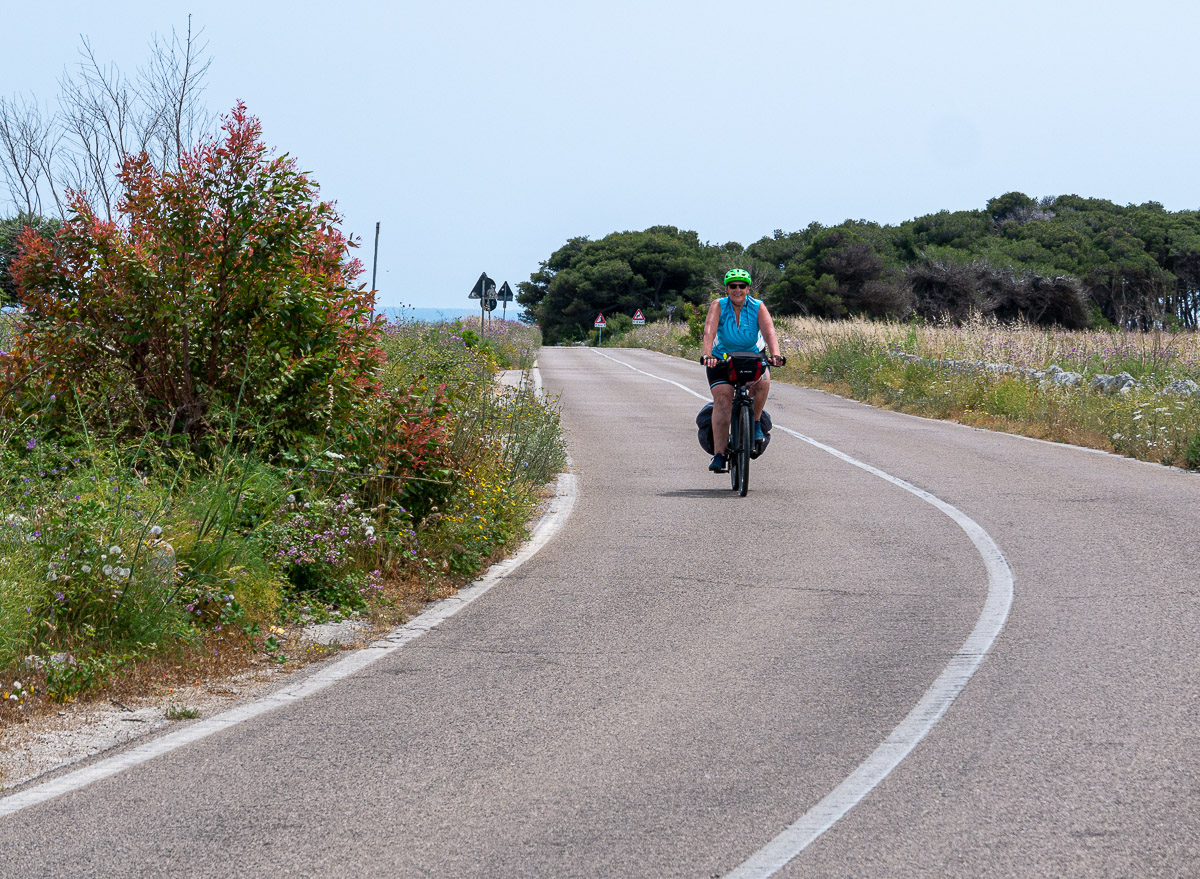 21 & 22) Evening in Otranto: first, we strolled through the narrow streets of the old town before reaching the promenade overlooking the harbor and 2nd, one of many divine dinners – noodles with tuna, pistachios, mint and lemon. 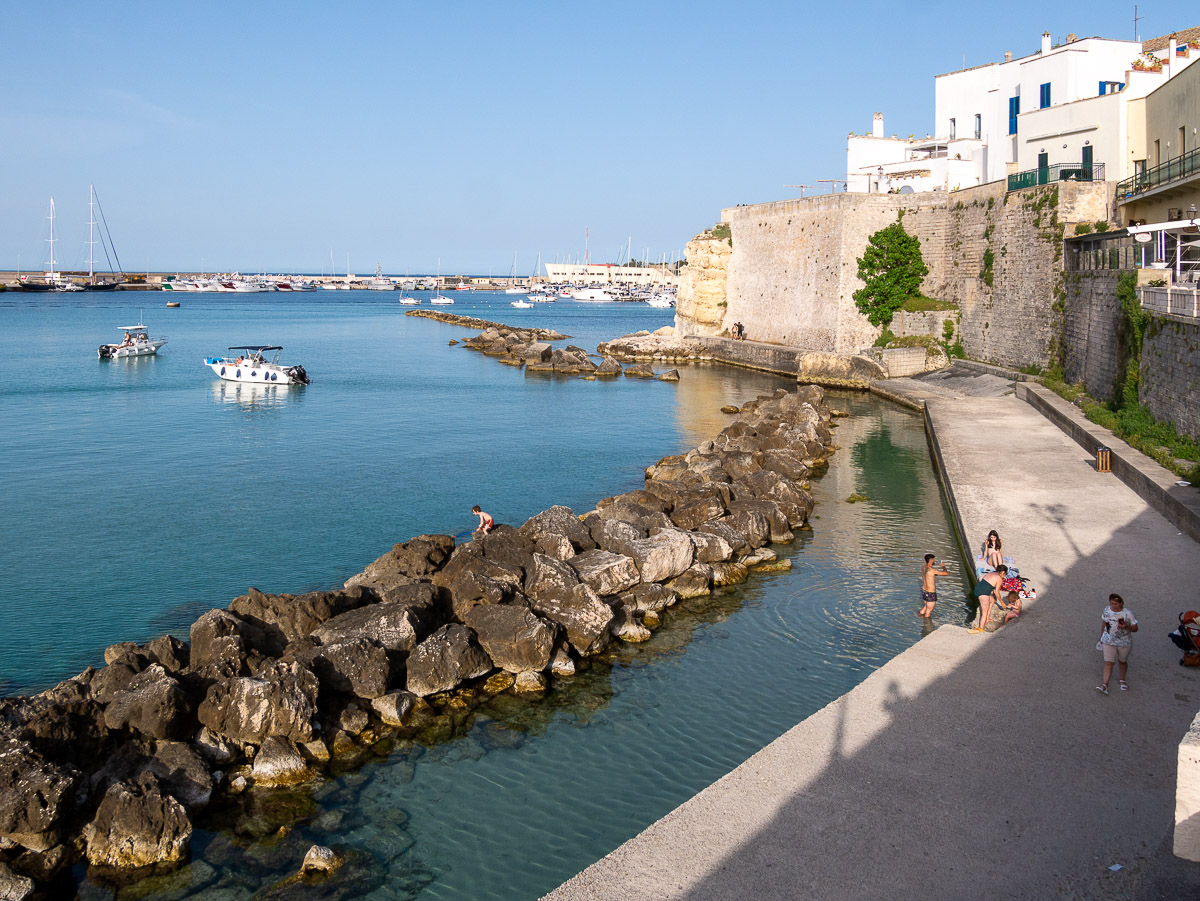 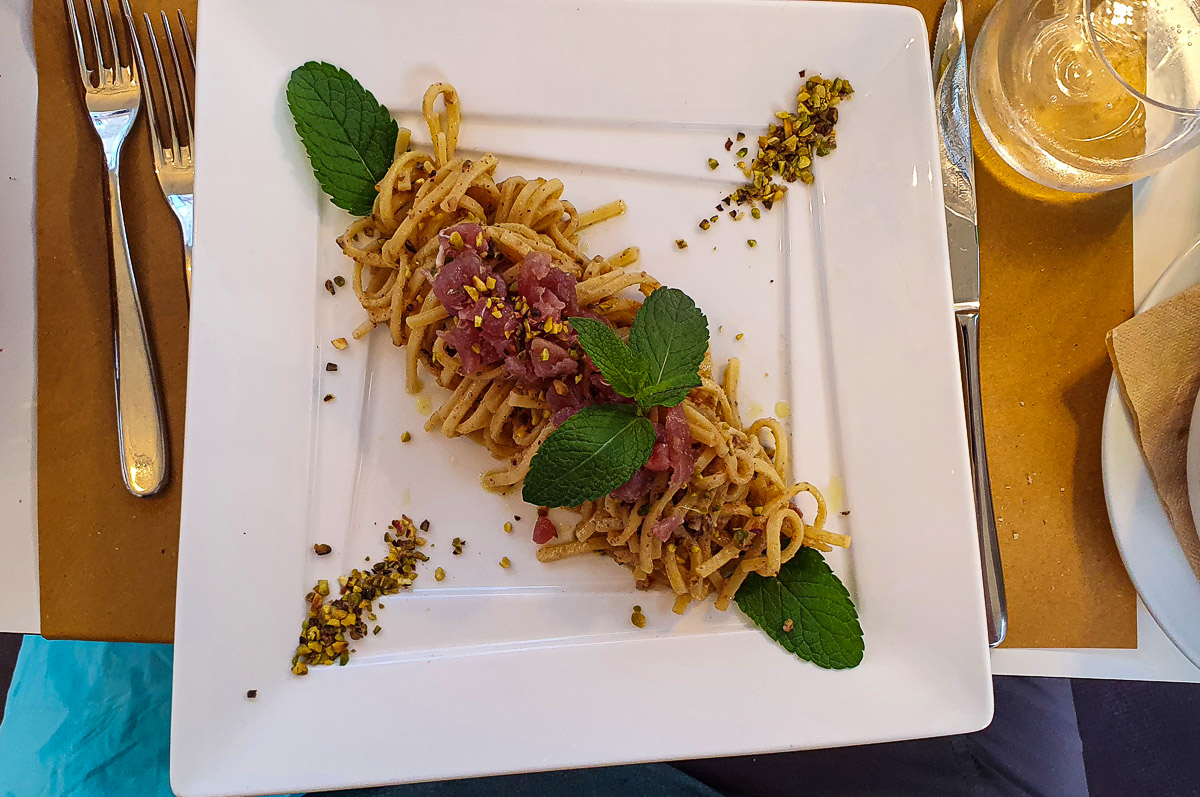 23) In France and Germany there are many bike routes, and the trails and signage are generally well-marked and maintained. Here it’s a different story – this was just one of the many indications that the municipalities in this part of Italy are desperately poor (or the money gets re-routed to certain pockets…). There weren’t many “official” bike routes and the signage was sparse. We were happy for the gpx tracks from the tour operator. 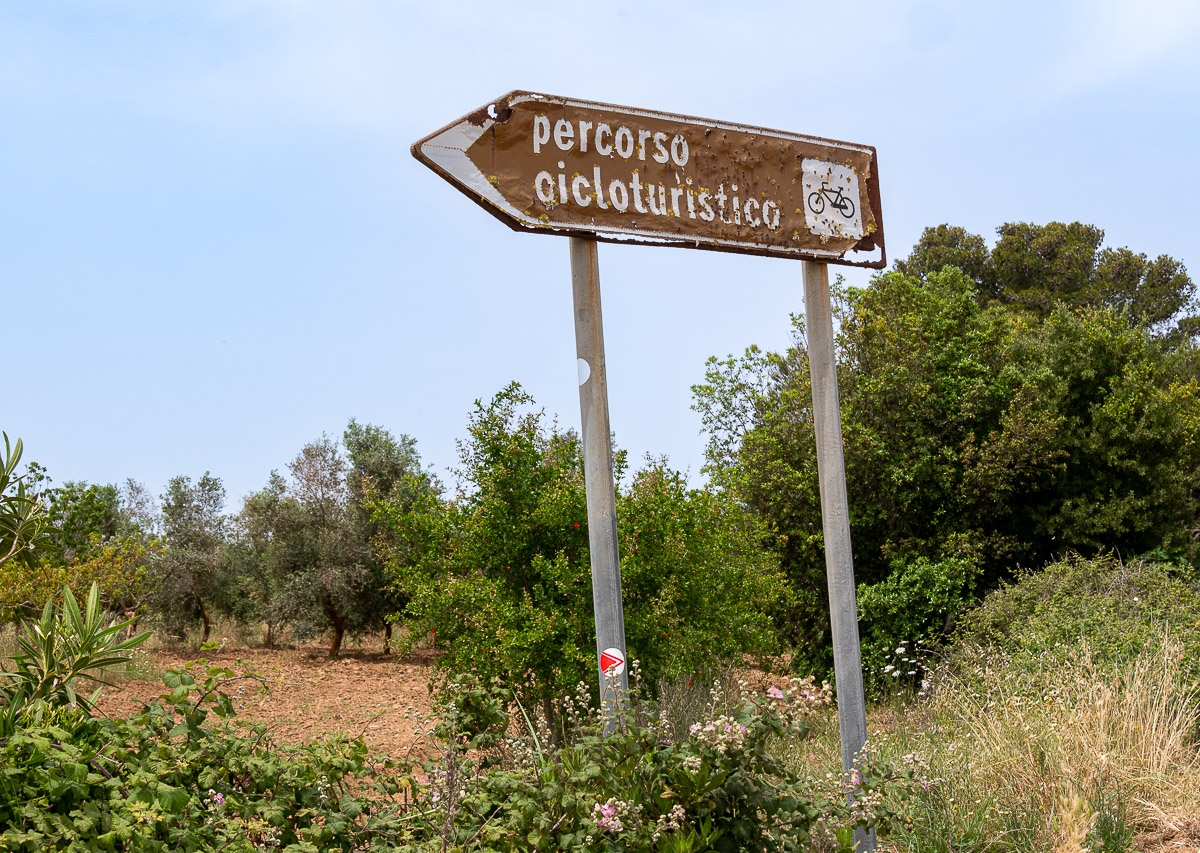 24) A typical country road – you know it’s narrow when a bike and an Ape have trouble passing one another. 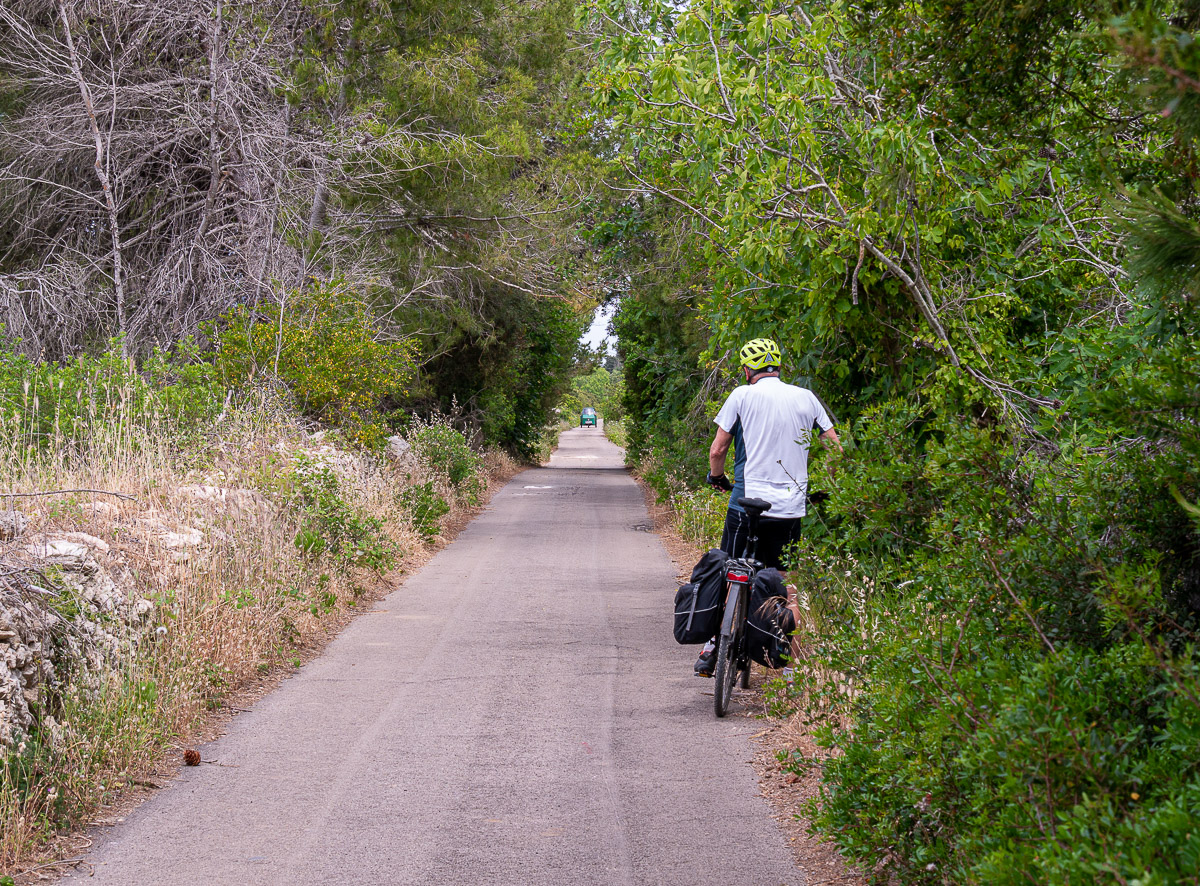 25) Archaeological Area of Roca Vecchia: on the site of the settlement of an ancient Grecian tribe (Messapians) who inhabited the region in the pre-Roman era. 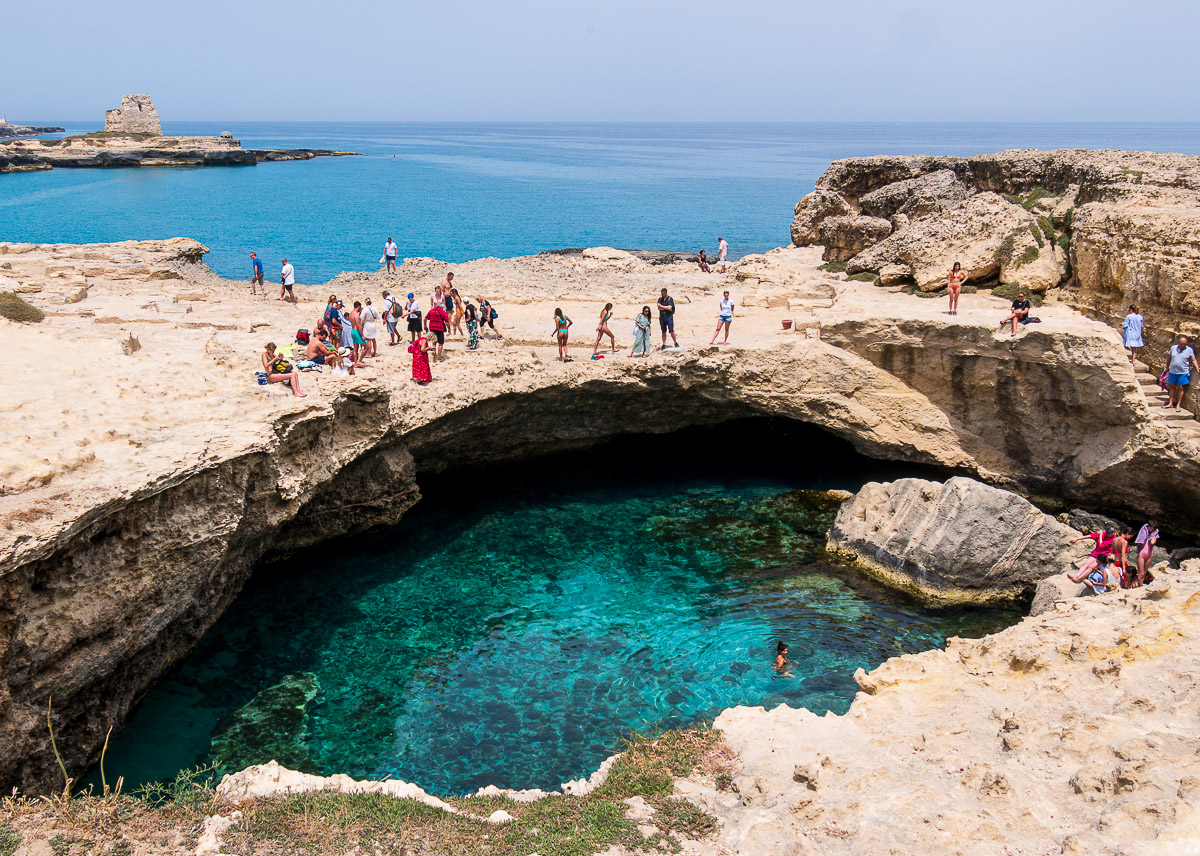 26 & 27) Looking for lunch: One thing I’ve learned (but obviously not well enough) is that in rural areas of Europe, restaurants close for several hours in the afternoon and if you’re hungry, you’re mostly outta luck. After passing through several kilometers of countryside that looked like 26, we suddenly came upon a town gate and thought, Yippee, civilization! Well, no – this teeny village had rolled up the streets during the afternoon hours. 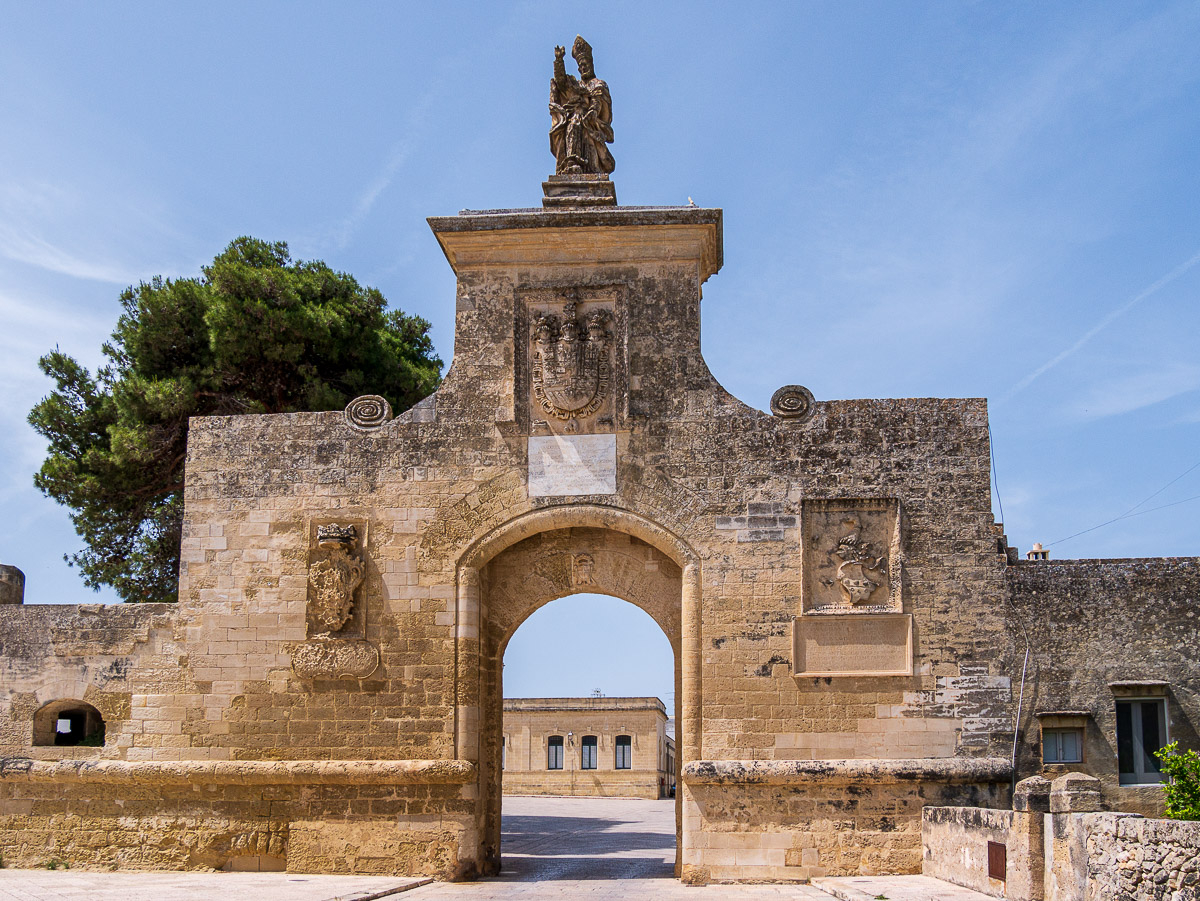 28-30) Lecce: because of the city’s many baroque structures, Lecce is known as “the Florence of the South”. I haven’t been to Florence in an eternity so I can’t really compare, but Lecce was a great highlight and we were happy we decided to stay an extra day at the end of the bike tour. 28) right in the middle of town is a Roman amphitheater, 29 & 30) the fabulous façade of the Basilica Santa Croce and the carved wood ceiling inside 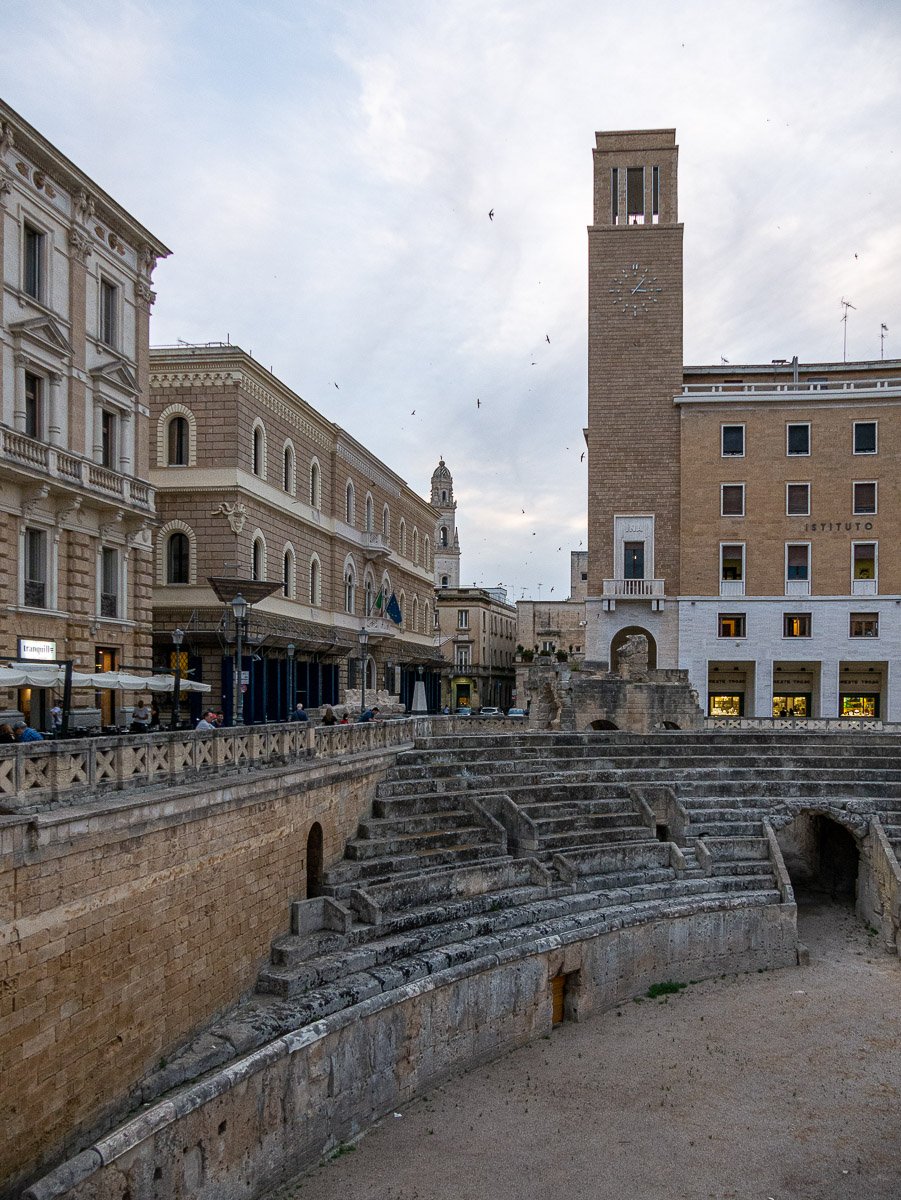 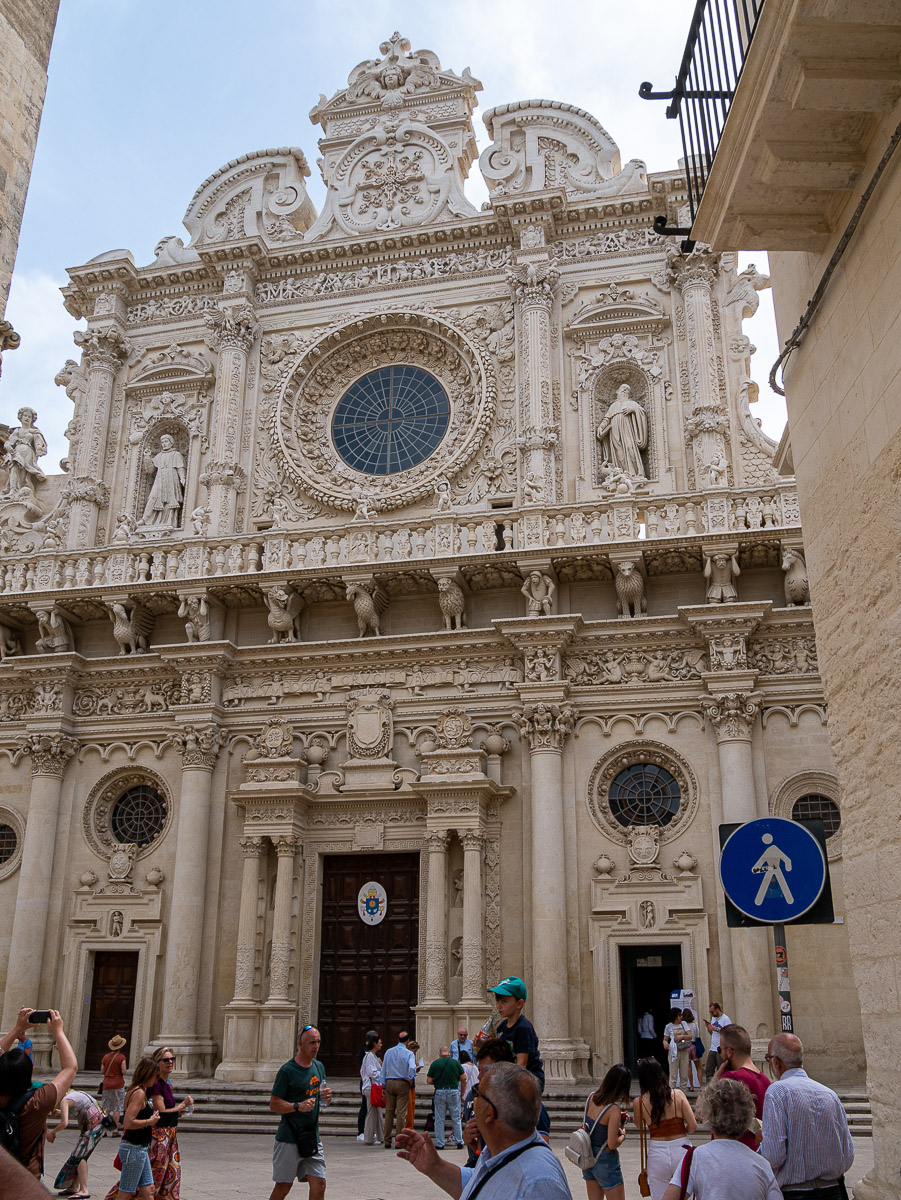 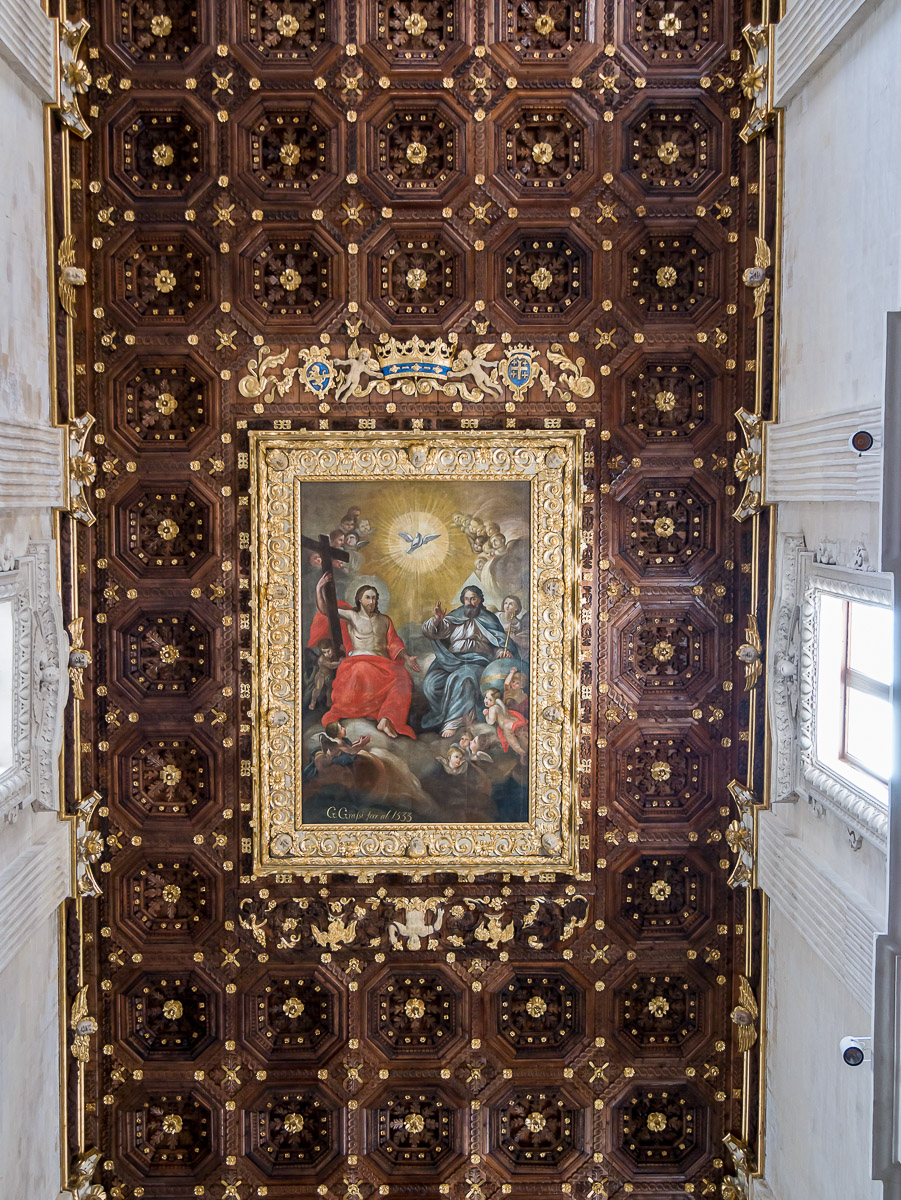 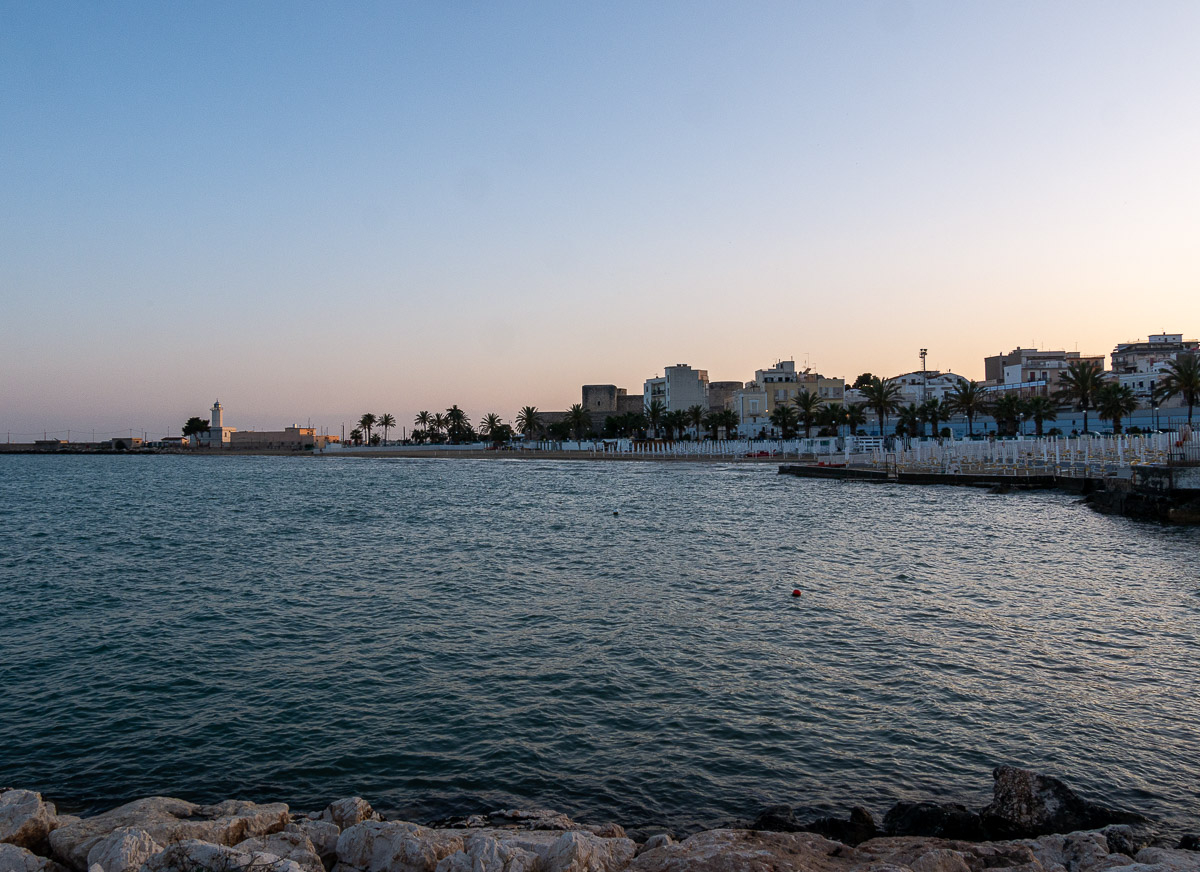 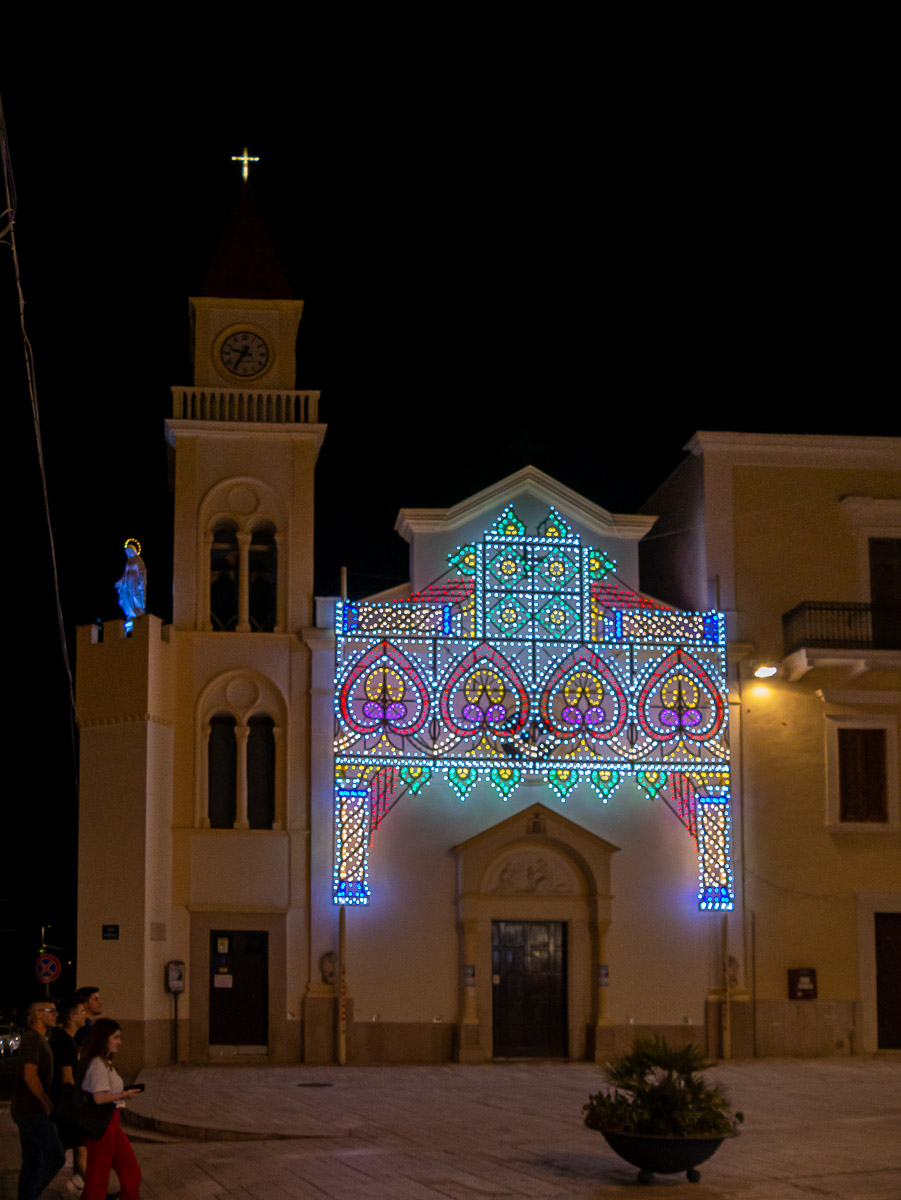 33) One thing we always do before leaving Italy (or France) is to visit a super-sized grocery store and stock up on local products. You know you’re in Italy when there’s a bulk-packed aisle of olive oil. 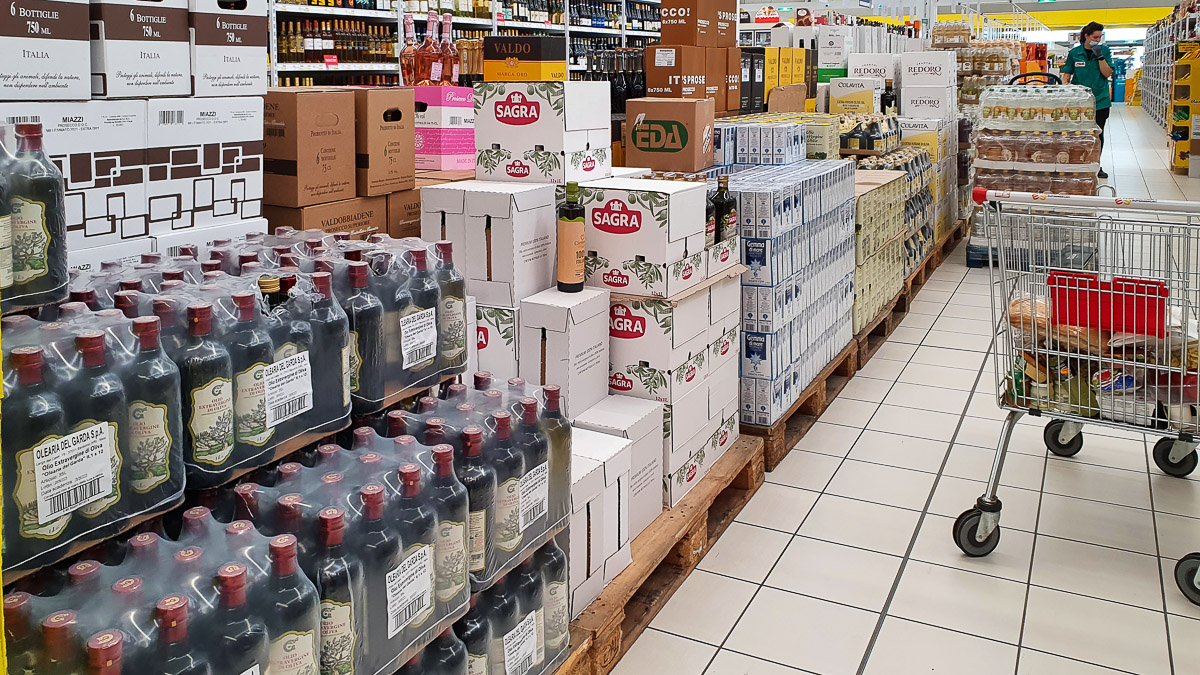 34) After two weeks of practically non-stop sunshine we knew we were nearing home when we saw the rain clouds over the Alps just south of Garmisch Partenkirchen. Sigh. All good things must come to an end.