Caught up in Karakorum

Awais Yaqub One Inspired soulPakistan /IslamabadRegistered Users Posts: 10,572 Major grins
April 14, 2016 edited July 20, 2016 in Journeys
Planned a trip to beautiful Hunza Valley and up to China Border (Hunza which i have covered in Autumn season) the valley is known for its beautiful cherry blossom too. The weather prediction was not favorable and there was alert of landslide, which are common and mostly ignored. So we continued the road trip. On our way we encountered small road blocks which our 4x4 vehicle easily crossed, upon reaching 50 km from Chilas in 16-17 hours from Islamabad. We had to stop and landslides became horrible while falling rocks leveled some shops in front of our eyes and trip became a nightmare. We rushed back blindly, due to total darkness (no electricity, no moonlight, and raining continuously) we found refuge close to road side hotel where most of the travellers were already clustered. We were sheltered in our vehicle for first night while horrific sounds of landslides kept us up. We were bit relaxed in morning after realizing we were at least 300 meters from mountains, and not directly under the shadow of loose rocks, like most of the part of Karakorum highway is.

Next day police check post opened doors for us where we spent the night, next morning we proceeded further and learned KKH was blocked from 90 different places up to Hunza valley, and roadblocks are as long as 1 km throughout. All we could do was to wait and pray for no more rain! We returned to check-post and spent next 5 days without electricity, network, or facilities we could not return to Islamabad nor we could move ahead, reported our safety to family with the help of locals.

We were not alone, the vulnerable route of KKH is main source of trade between China and Pakistan, the region supplies timber throughout Pakistan. Hotel was filled with truck drivers and strangers where we had our breakfast, lunch and dinner. Prices started to increase with each passing day and water supply was extinct and we had to rush down to Indus River. Road blocks up to Gilgit were cleared on 5th day and we made to Gilgit on 7th day (the actual planned length of our trip). As we reconnected with network we learned about severity of situation and learned about government was offering evacuation for stranded tourists, we reached airport and were fortunate to board the plane to Islamabad. (gallery www.awais.smugmug.com/Photography/Stuck-in-Karakoram-Highway) 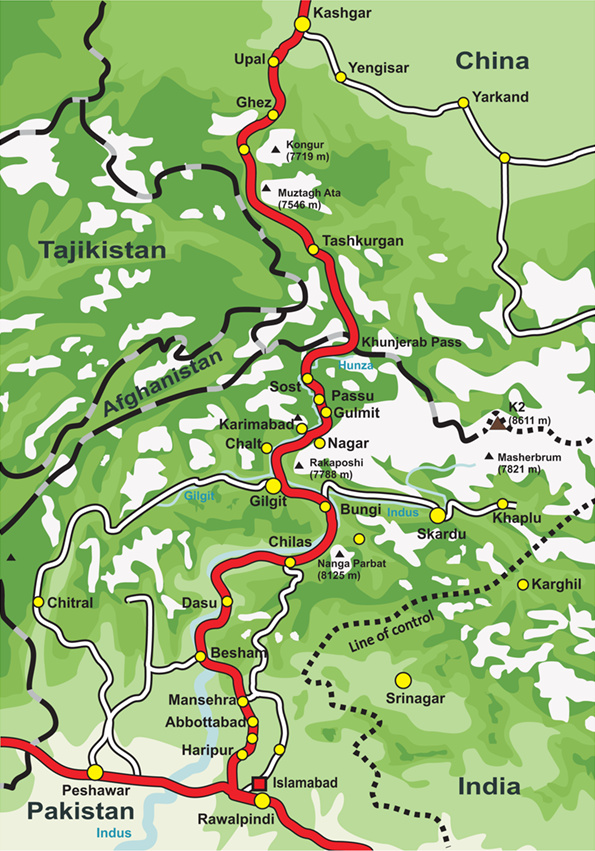 Some photos with cell phone it was pleasant to see the sunlight after 2 days, as situation got worst with each falling drop of rain.

We survived this, that night.

Trucks waiting for route to clear

Truck in Pakistan is always a subject to shoot

Most of the geography of KKH is barren and deserted

Chicken truck was also caught up with us, as demand grew price increased. Condition of chicken was also deteriorating.

Pictures from the only hotel in vicinity
waiter

Ayub, the waiter generously offered us his cell phone to connect with loved ones back home. What a big heart boy. Mr. Ghani, owner of the hotel made yummy food, his business was shining.

Mr. Hazart the bread maker was most experienced worker in hotel and loved to pose for camera

Finally help arrived, do you notice few trees in background which saved fate of people by diverting flood of rocks from sweeping some residents

Encountered these machines at several places

Notice the que, a lot of people were trying to move downwards, they thought as shortage of fuel and food increases it will be easier for them. And we were among who were travelling upwards, hopeful to get on airplane for ride back home or atleast connect with network.

In que after battling to get on to flight, everyone wanted to board the 1st flight back home, fortunately we were among firsts that day. And reached home on Friday as promised.

made some videos will share them later
Thine is the beauty of light; mine is the song of fire. Thy beauty exalts the heart; my song inspires the soul. Allama Iqbal