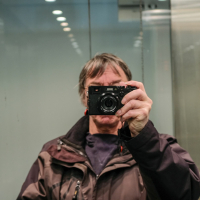 Snaphappy1952 Newcastle Upon TyneRegistered Users Posts: 9 Big grins
April 21, 2019 in Street and Documentary
Hello.
I have been a Smugmug member for a long time..but somehow this site has passed me by. I hope to rectify that.

I am John, retired from the North East of the UK. I am 99% a street photographer.

I think it’s the “thing” to link your smugmug site? Correction - I can’t do that straight away! Maybe later?