Last month (May 22) we took a two-week trip to Puglia in the far south of Italy. Although it meant a long drive for us (1300 km) we wanted to take our own bicycles, so we made the decision to make an overnight stop in each direction to break up the trip.

Our stop on the way south was in Bologna where the Giro d’Italia (one of the premiere road bike races of the world) was passing through that day. Luckily the traffic on the way down was not as horrible as it often is and we arrived in Bologna with enough time to refresh ourselves and make our way to the edge of the race route.

1) Giro d’Italia live: it was over in a matter of seconds, and I was severely humbled as a photographer, but it was great to have experienced at least once in person. Here’s the pack approaching. 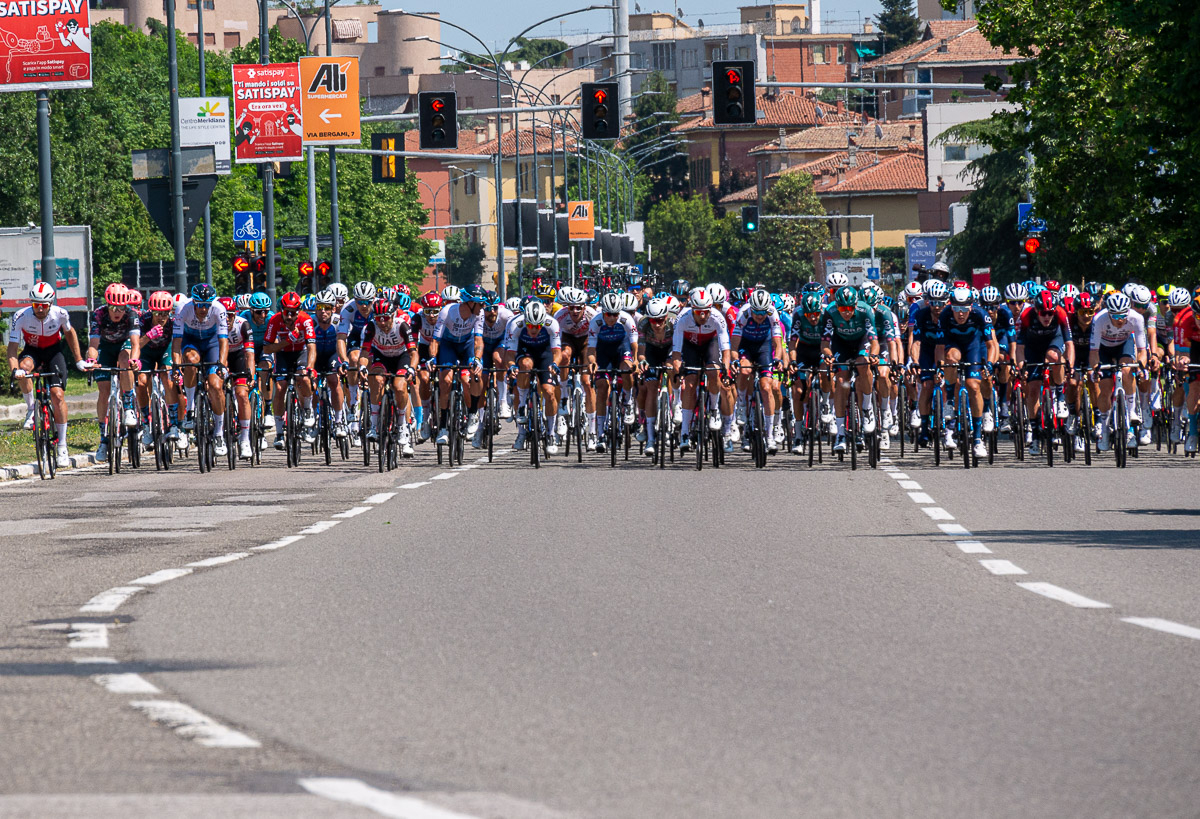 2) Bologna: Monument to Fallen Partisans
We spent late afternoon and evening getting first impressions of this lively and lovely city. One thing that made a big impression on both of us was this monument on the wall of the Palazzo d’Accursio on the Piazza Maggiore. I’ve seen many memorials to the fallen of WWI and WWII but this one with hundreds of pictures (about 6 meters) of the men and women who sacrificed their lives was extremely moving. 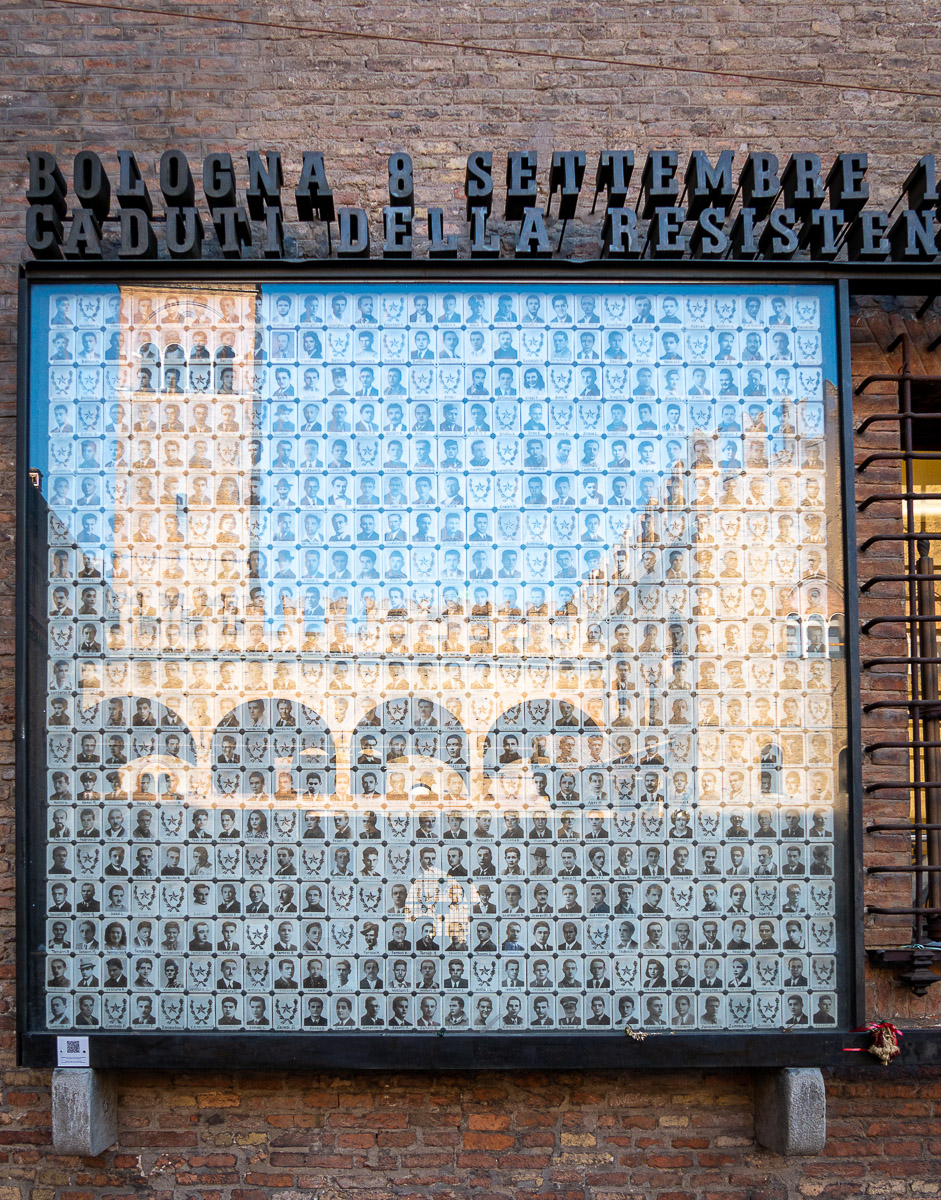 3) Peschici, dinner on the beach: after another long day of driving, we arrived in Peschici on the Gargano peninsula (that spur on the back of the Italian boot). Strange as is may seem, from this village you can see the sun rise AND set into the Adriatic Sea. And yes, dinner was as good as the view. 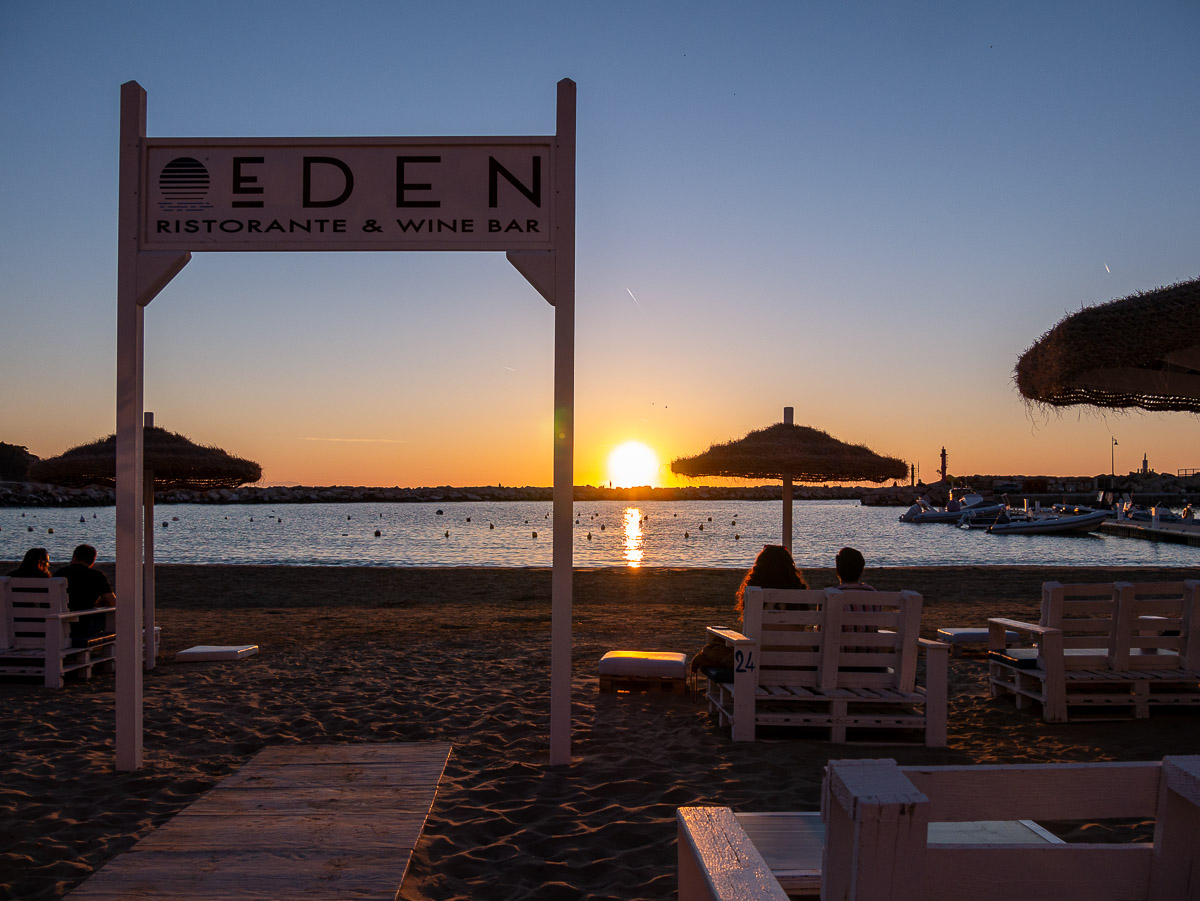 4) Driving around the Gargano peninsula: This area was the site of many wind-surfing vacations in my husband’s younger years so we took extra time to drive the scenic route around the peninsula so he could relive a few fond memories and show me the grandiose scenery. 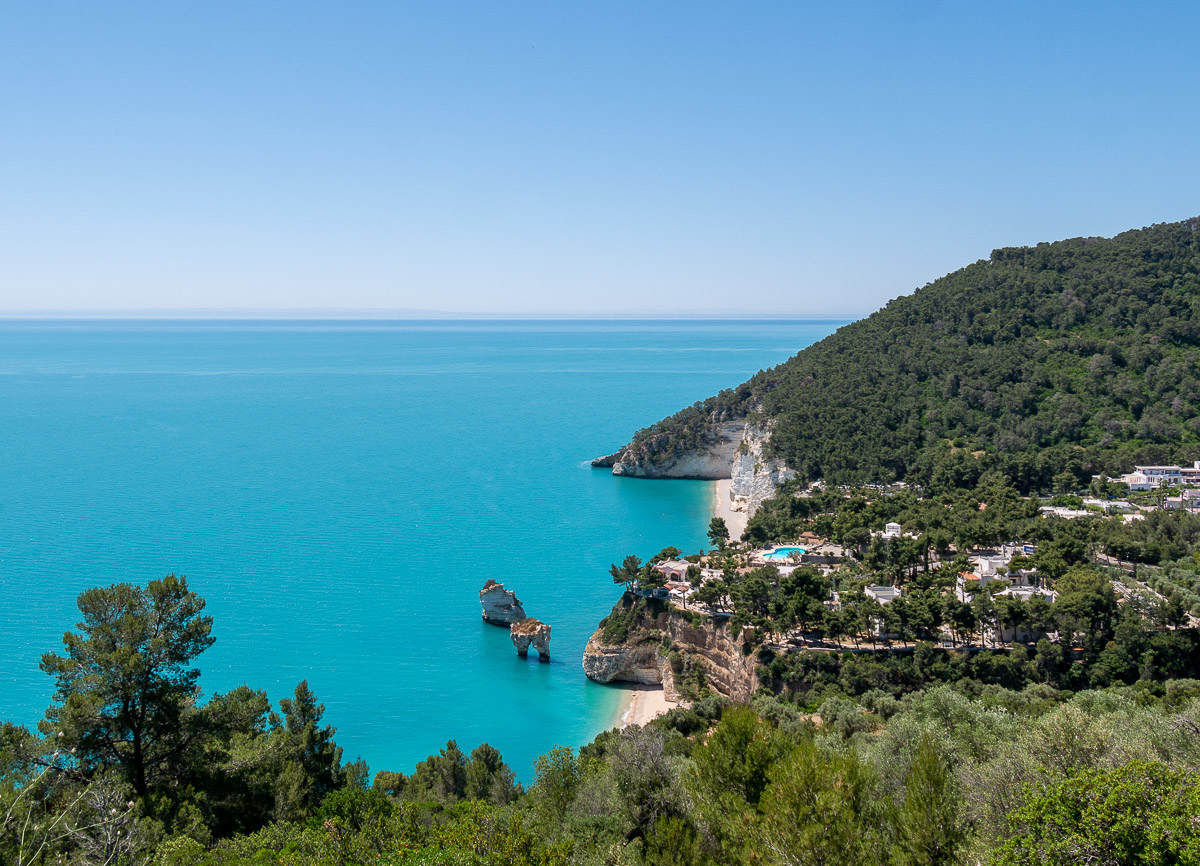 5) Monopoli: We spent the following night in Monopoli and took an evening walk through the narrow streets of this old port city. 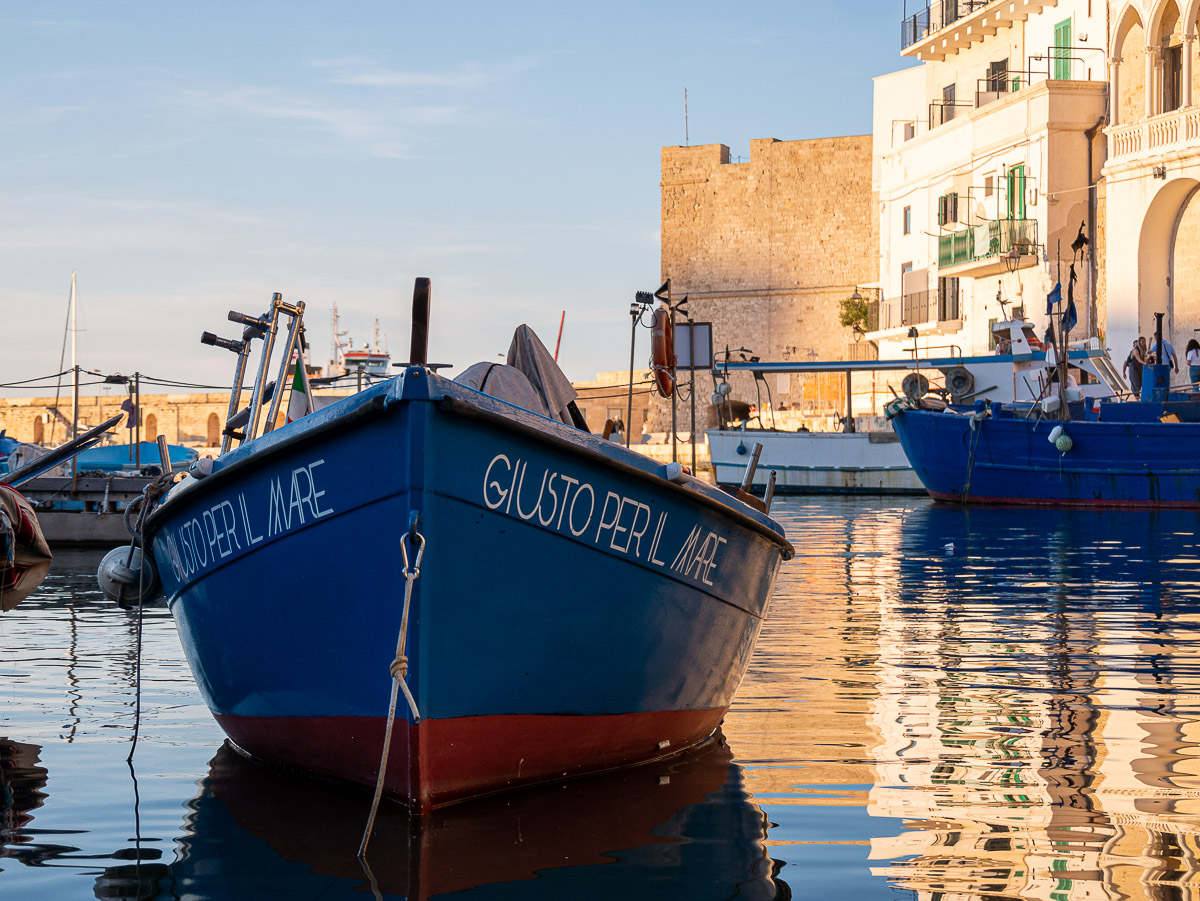 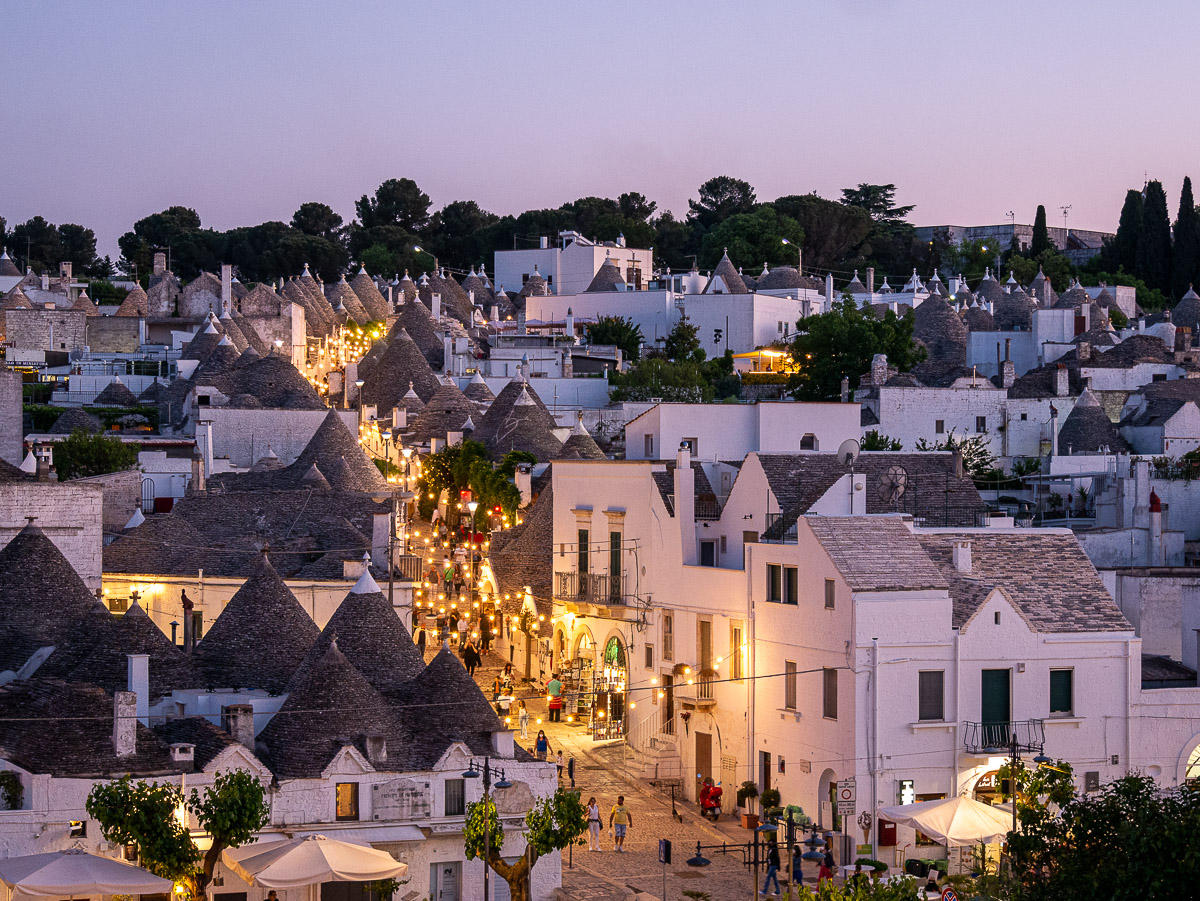 The biking part of our vacation was a 6-day “individual” bike tour. “Individual” means that while there may be more people taking part in the tour at that particular time, each is provided with informational materials, good maps, thorough directions and even gpx tracks so that each party makes their own way each day from point A to point B, making as many or as few stops along tohe 50-60 km routes as suits their fancy. The tour operator makes all the hotel arrangements and one’s luggage is transported from hotel to hotel. This tour was very well organized with impeccable materials and great hotels – it was a great way to discover a new area.

7-10) First day of riding: narrow country roads lined by wildflowers & stone walls; the round “square” in Martina Franca; the landscape was not completely flat – just enough hills to make the going interesting; our first glimpse of the town of Ostuni, known for its whitewashed old town. 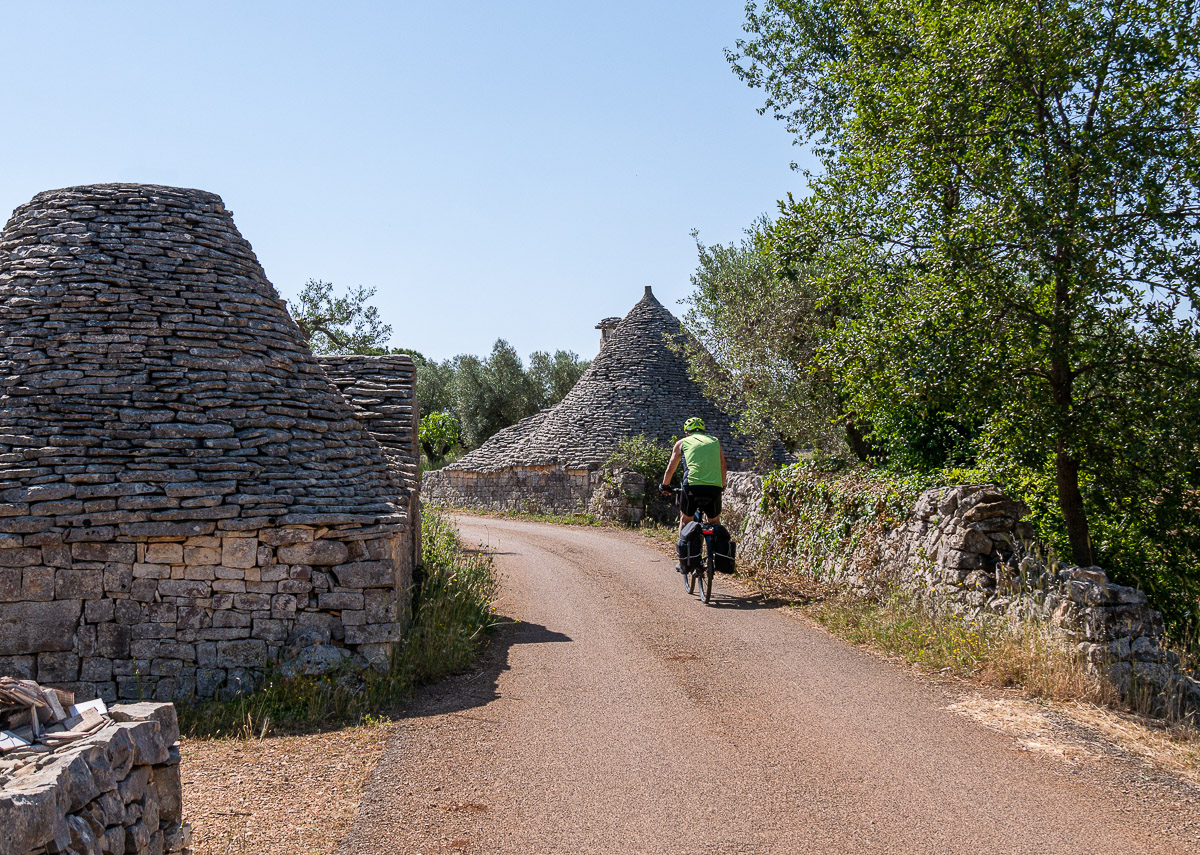 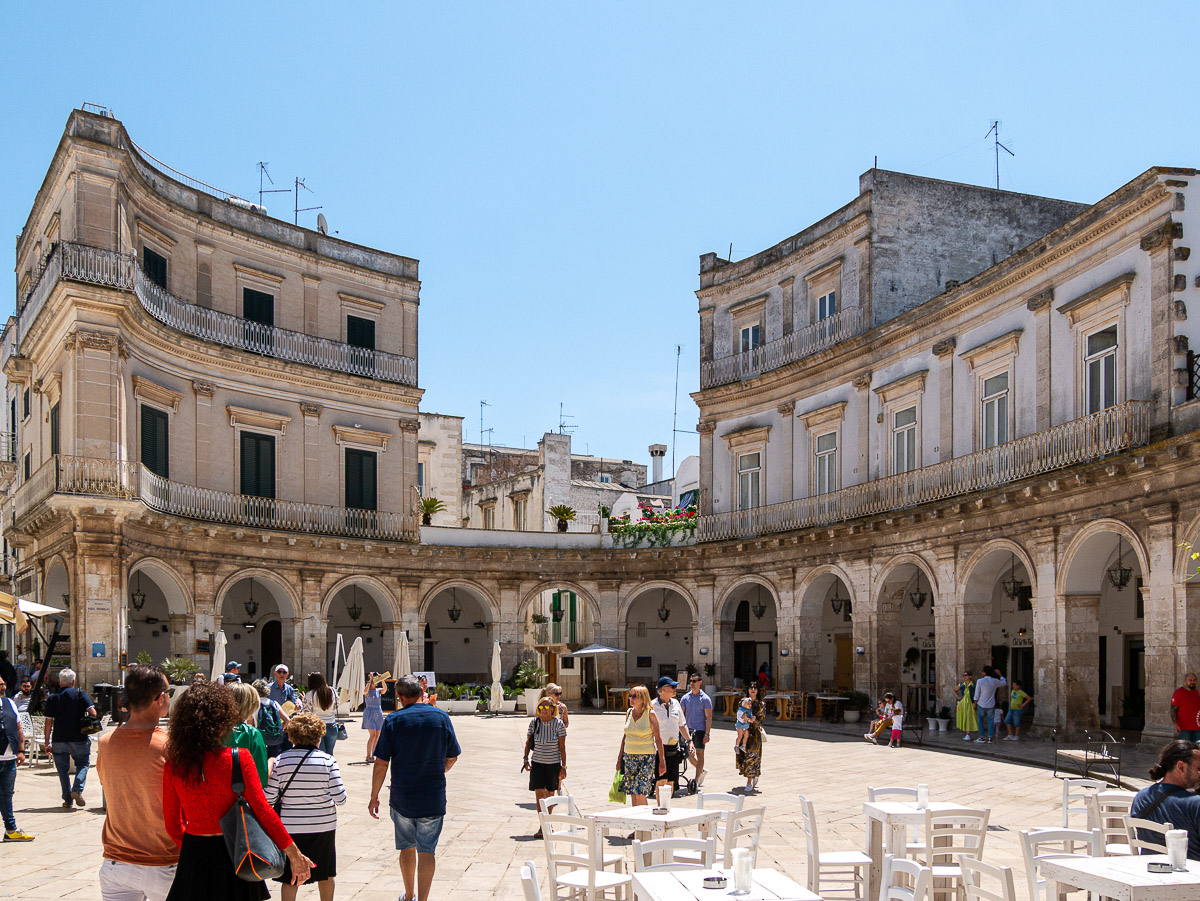 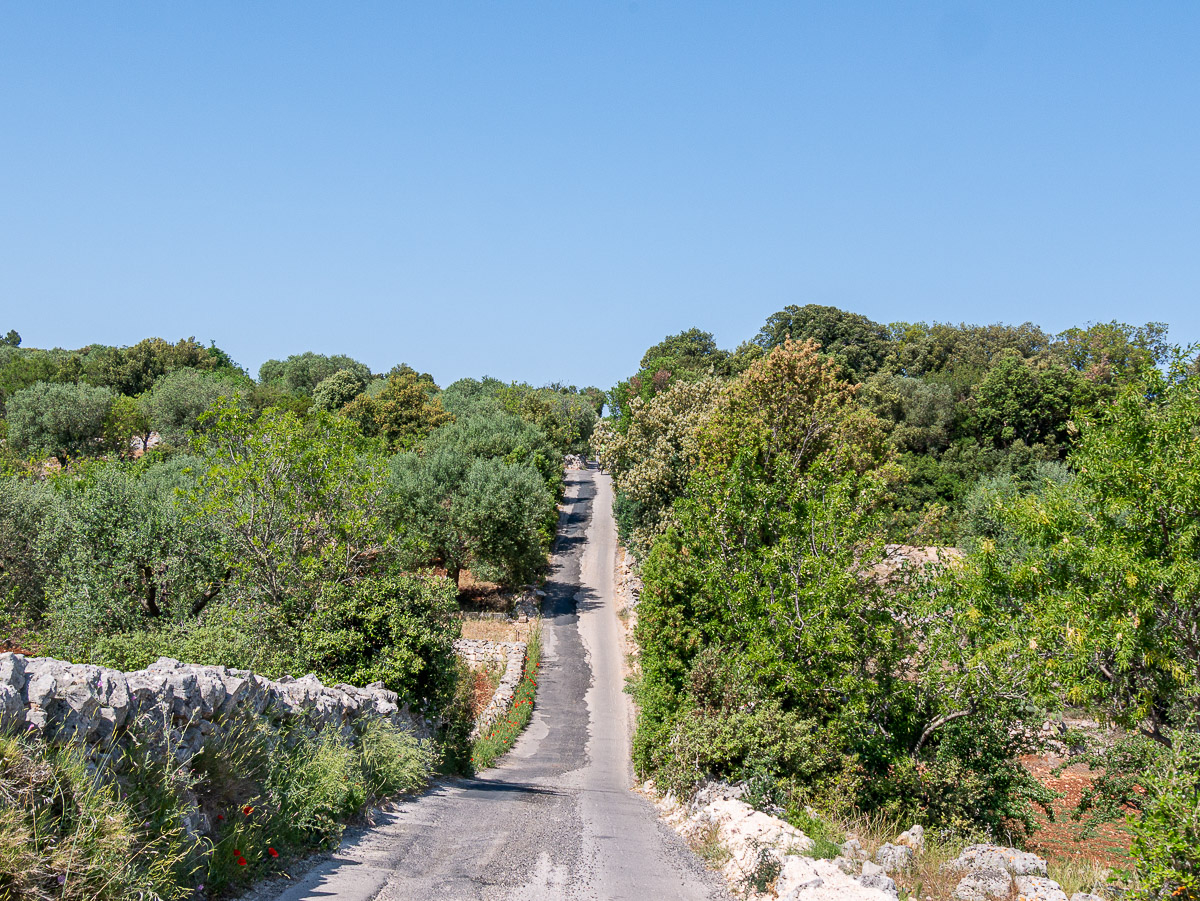 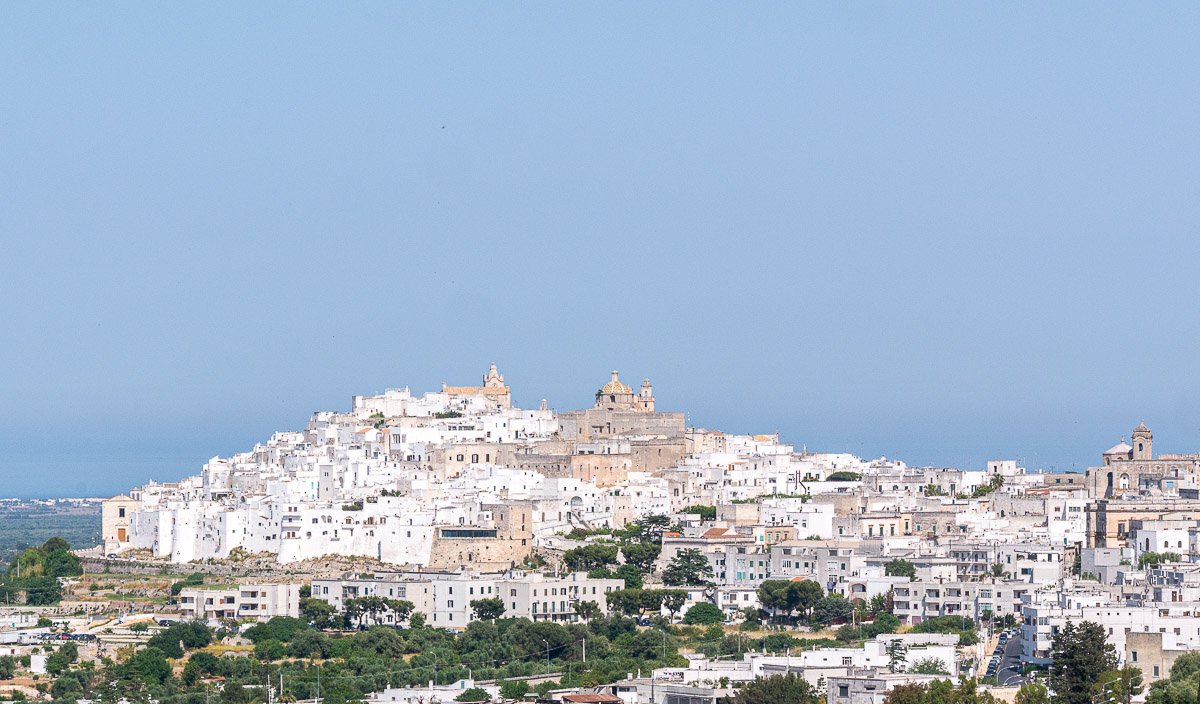 11) First sighting of the Ionian Sea: the previous morning we woke up in sight of the Adriatic Sea and now we’d crossed the heel of the boot and would ride south for two days along the Ionian Sea. 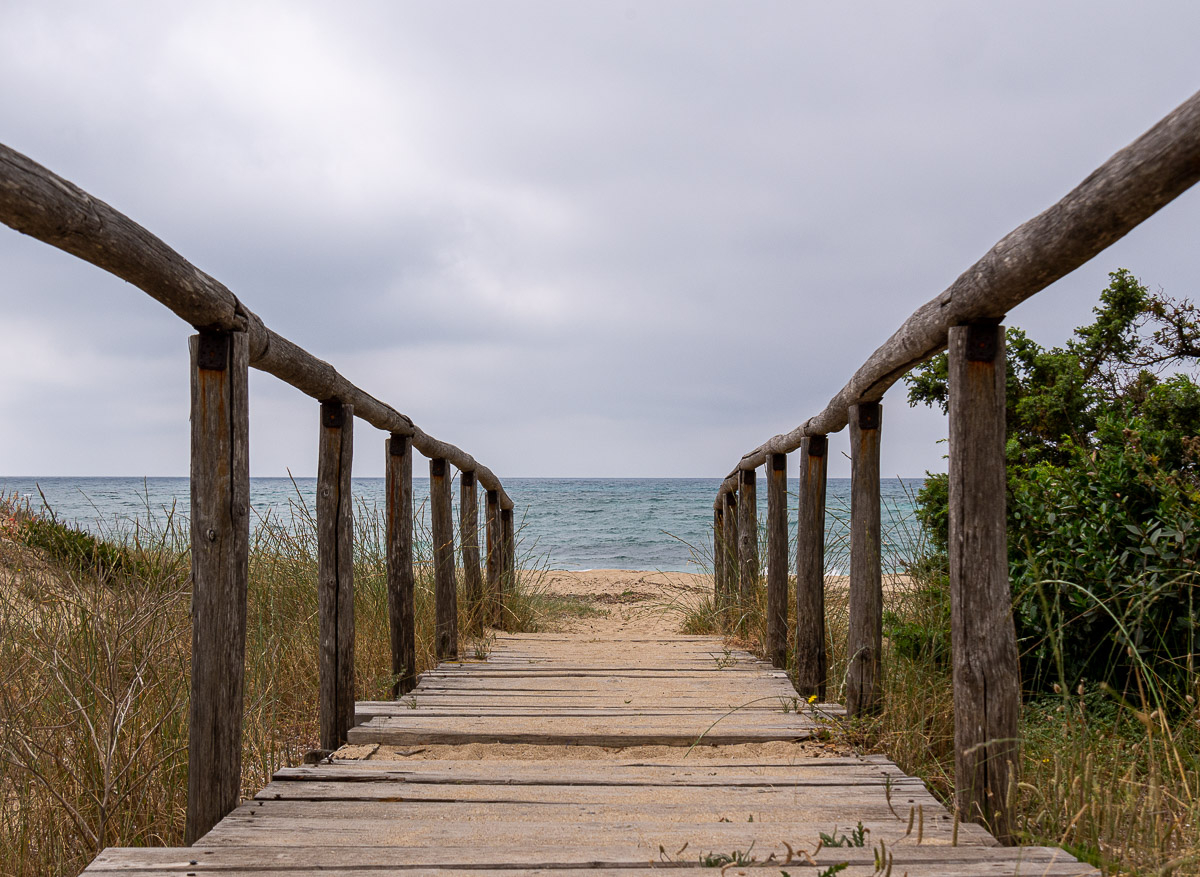 12) Cactus and towers: I was astonished by the huge prickly pear cactus trees lining many roadways, often used as fences or hedges. Completely unexpected for me! Another frequent sight along the coast were the watchtowers built to guard against intruders. This one at Porto Cesareo was built in the 16th century. 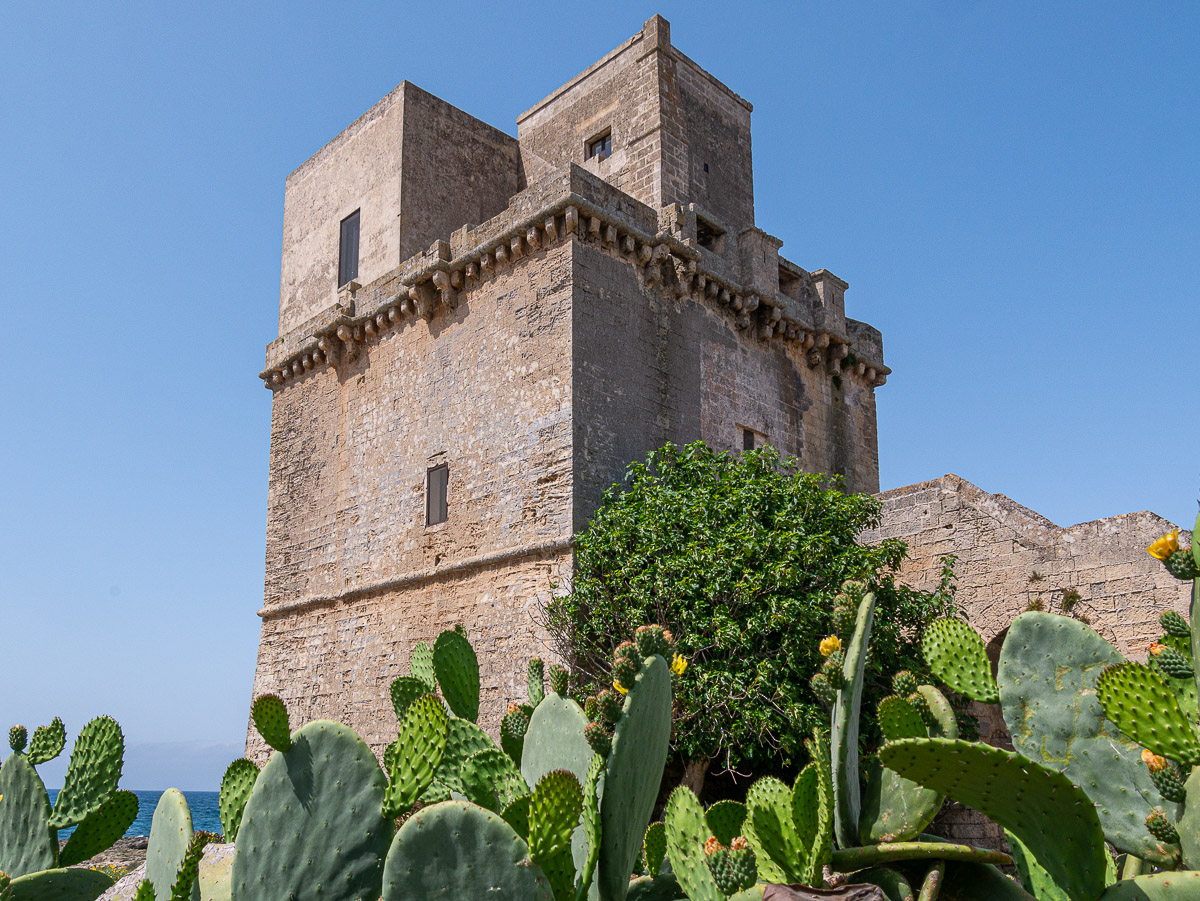 13 & 14) An evening walk around Gallipoli. (No relation to the WWI battle site) This lovely town was once a strategic center of influence for maritime trade, now a touristic hot spot. I appreciated the authenticity of the town once you were away from the one or two main tourist streets. 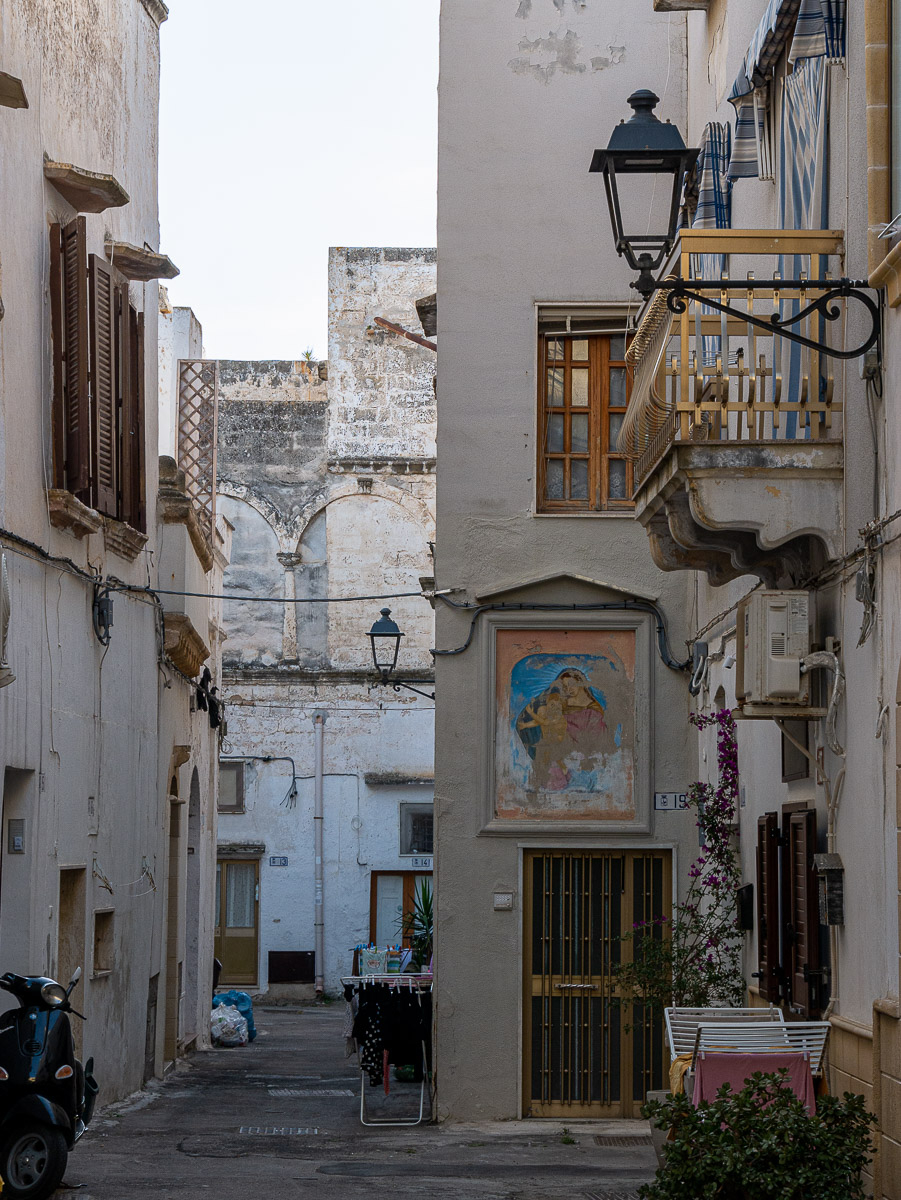 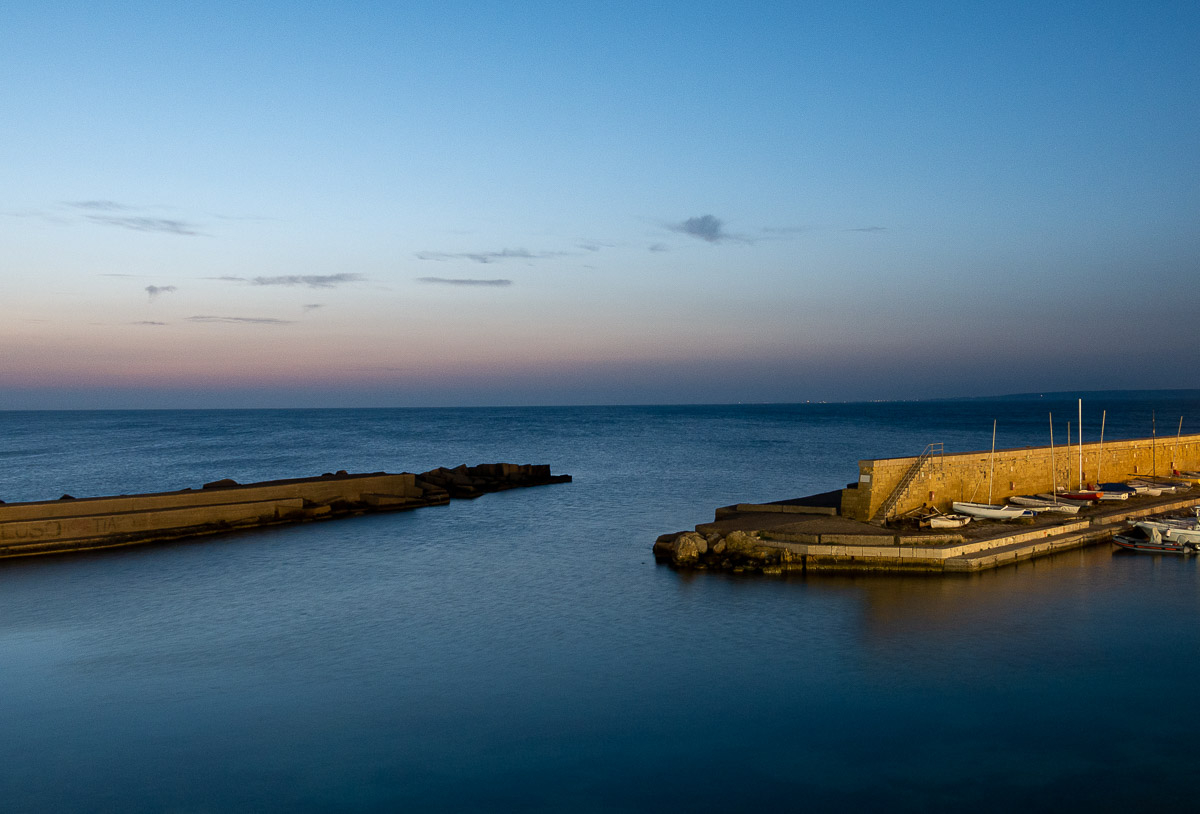 15) Breakfast: My goodness – this one of three tables filled with sweet and savory treats at our hotel’s rooftop terrace breakfast area. 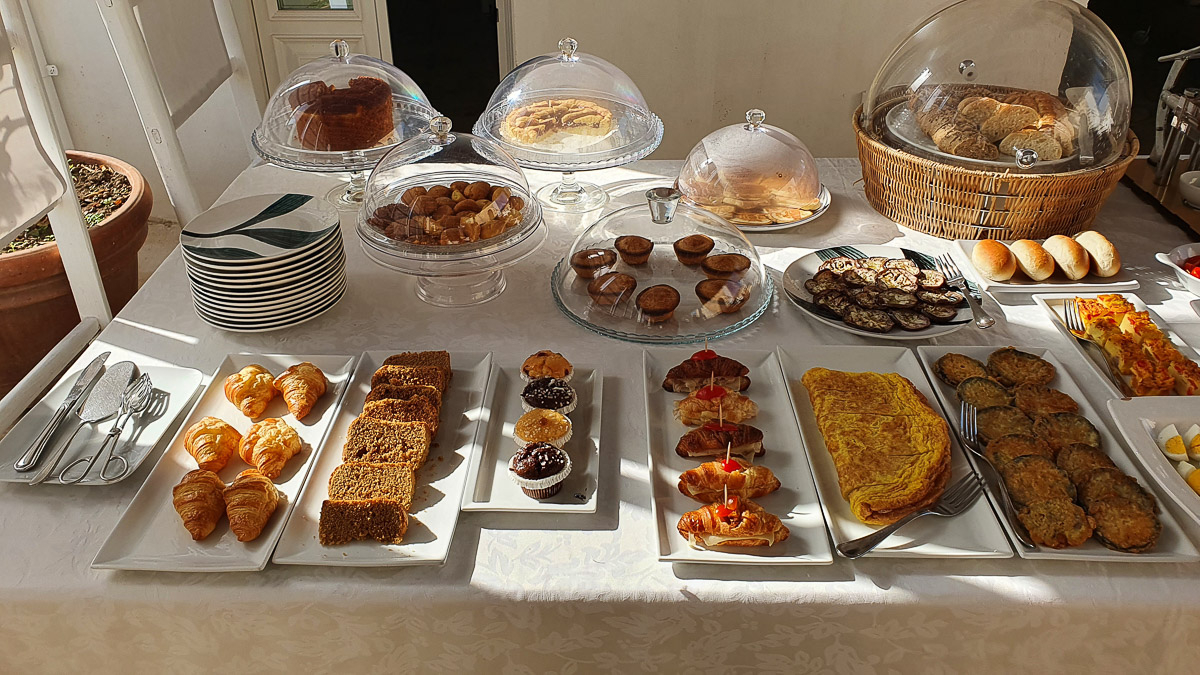 16 & 17) The Fontana Greca is located near the bridge that connects the new town of Gallipoli to the old. The fountain was though to be the oldest in Italy, dating to 3 B.C. when the Greeks were in residence, but new dating techniques have placed its origins nearer to the Renaissance – however, the experts are still debating. 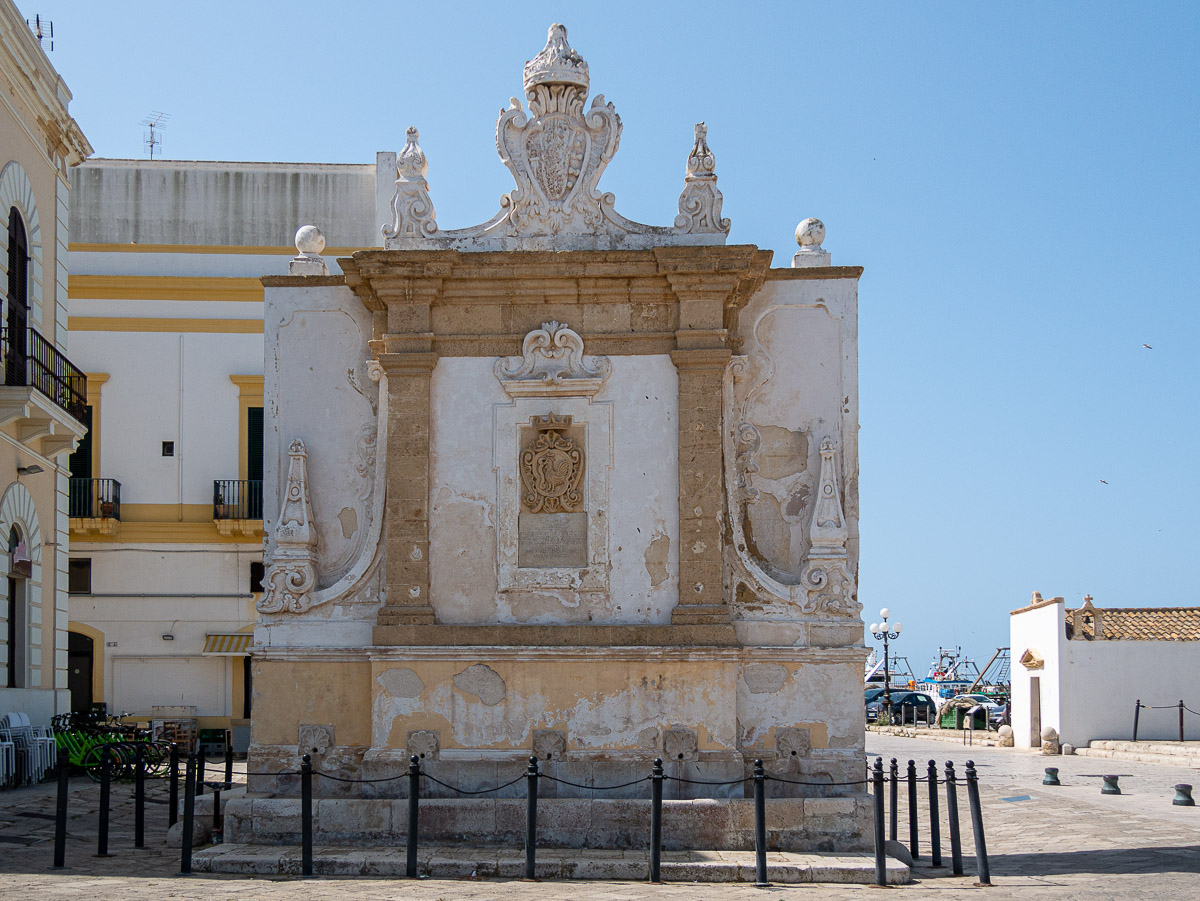 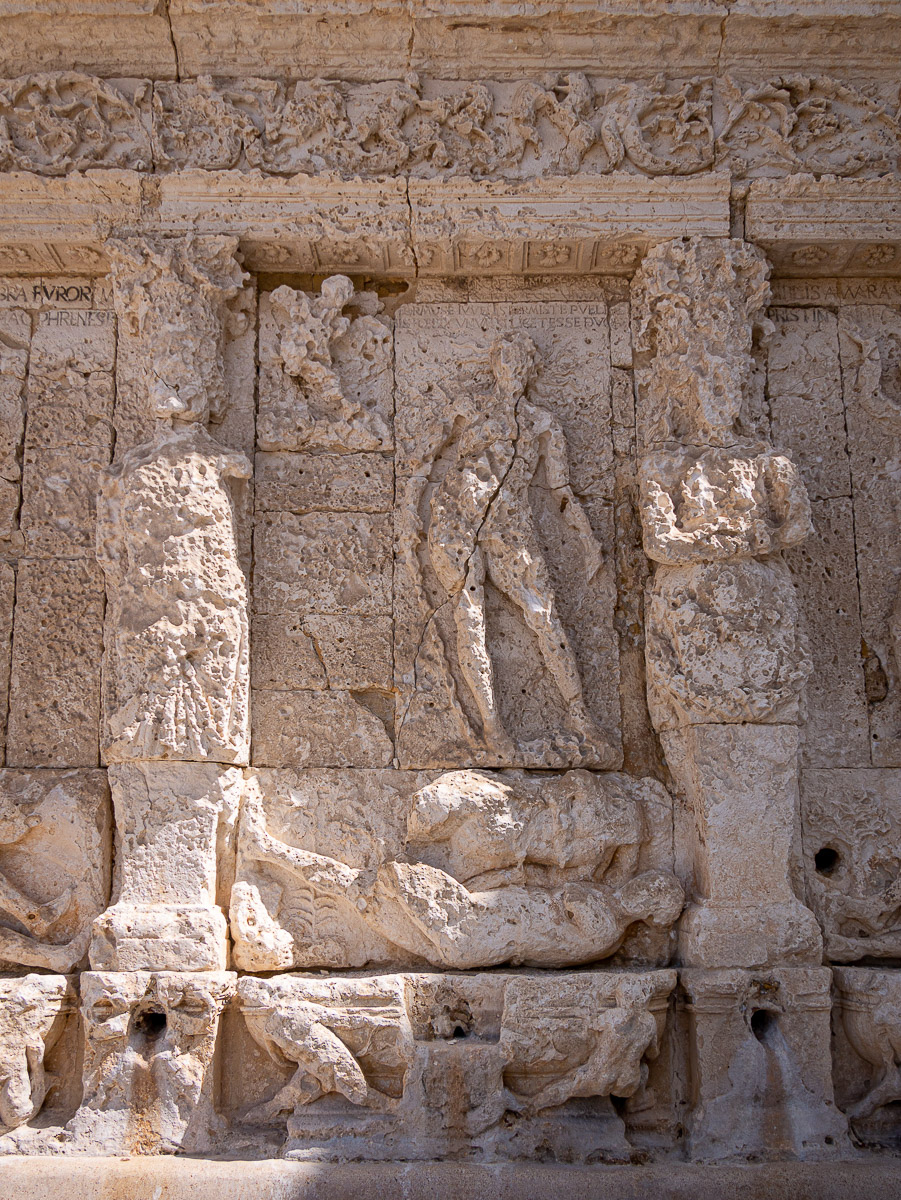 Part 2 to can be found here: https://dgrin.com/discussion/268620/biking-in-puglia-italy-part-2#latest