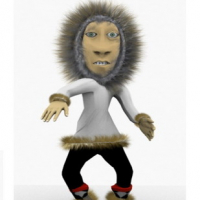 Point Hope Alaska is the oldest continually inhabited settlement or village in all of North America.

Hello.. My name is David, I am from Boston, I was working in Alaska, at the airport, my company sent me to this tiny Eskimo village for just 3 weeks, to wire some construction camps. When the job was finished, I quit the company and stayed.

Point Hope - Tikigaq A small whaling village of only 700 people 200 miles above the Arctic circle in the Northwest portion of the state.

Nothing, but empty barren tundra,for hundreds of miles, Life here can accurately be traced back many thousands of years to this one spot of land.

We live out on the ocean ice pack for two months or longer, when we hunt the mighty bowhead whale. The women use tents a 1/2 > 3/4 a mile back from the lead opening where the hunters wait, watch, and sleep, no tents for the hunters. It is 40 below zero and colder and very windy.

waiting, watching, eating, sleeping, this is home for the next two months. five miles out on the Ocean Ice pack. 700 people move out here to live and hunt for food.

come along and learn the eskimo way...!

18 WHALING CREWS are spaced out along the ocean Ice pace 1/2 - 3/4 miles apart. some families stay together out on the ice. But the entire community is spread out some 10 miles along the narrow lead opening on the ice pack. Home Sweet Frozen Home.

How do you get delicious fresh drinking water, miles out on the ocean ice ?
No electricity, No plumbing, no place to go.. .. sit, wait, watch and learn from the comfort of your own home, how we live and the many "TRICKS" we employ to survive in this extremly harsh and unforgiving climate at the top of the world.

The lead opening, is starting to open, this is where the whales and other animales will migrate further north. We wait and watch & wait.

Hot meals 3 - 4 times a day, plenty of fresh hot donuts, coffee, tea, hot chocolate, and plenty of good food. but how do you get or obtain delicious fresh drinking water way out here in the middle of the ocean ?

The women ( 3-4 ) in each crew, 8 hunters plus the Umailiq, (whaling captain), are fed three - four times a day. This is our favorite time of year. Whaling. We melt snow for water. for washing cups, thermoses etc. but for drinking water, snow is yuk !

I have lots of incredible photos and bizarre true stories of life in the frozen north of Alaska.

Daisy Della Fay Koonuk Age 3. In 1983, United Bank of Alaska offered me 100K for the complete rights to this image. I am so happy I took the advice of some close friends in the Art World that convinced me to say NO!

Kathy Rock, age 10, I spent 1/2 hour with this young girl, out on the ocean ice. she is sitting on a snowmachine or snowmobile, the temp is 40 below zero.

Everytime I would bring the camera up, she would smile. I said NO! Please don't do that. I want you to look past me, I want you to pretend I am not even here. It took a while but I got the exact look I wanted -=[click]=- I only exposed one frame of film!:rolleyes
A blog of ICE
ALL PHOTOS
NEW ARCTIC FORUM